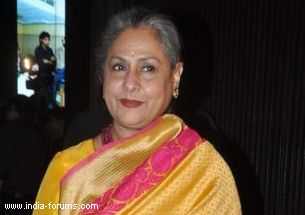 Veteran actress Jaya Bachchan is all set to return to acting with her maiden television appearance in an adaptation of Gujarati author Kajal Oza Vaidya's novel "Yog Viyog". The hunt is on for an actress who can play the younger Jaya.

The team is waiting to find a fresh face to fit the bill.

"The adaptation of Kajal Oza Vaidya's novel is nearly done. Jayaji is in preparation for her mother's part. But the producers Endemol are yet to find a younger actress to play Jaya's role," said a source close to the project.

The prerequisites for the young actress are not so much physical as emotional.

"We are not really looking so much at a physical resemblance as the younger actress' ability to emote as powerfully as Jayaji," the source added.

Names are being shortlisted for Jaya's younger version. Meanwhile, the senior actress will begin shooting for the serial next month.

"It was always Jayaji or no one else for the part. The author Kajal Oza Vaidya agreed to part with the television rights only on condition that Jayaji agrees to play the central role," said the source.

The television adaptation is being considerably revamped. It promises to be different from the novel.