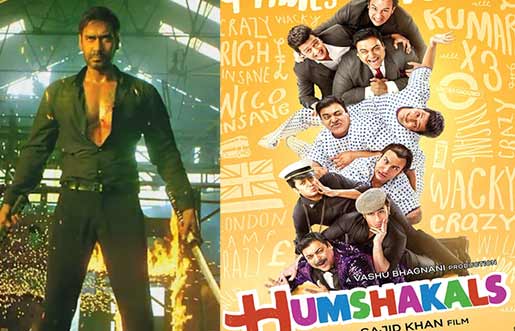 The awards are an Indian version of the Golden Raspberry Awards, which take place in the US. This year, the Golden Kela Awards will honour the worst of Bollywood films released during 2014.

Saif and Ajay are competing in the worst actor category against Arjun Kapoor ("Gunday" and everything else), Salman ("Kick") and surprisingly, Rani Mukerji for her tough police officer role in "Mardaani".

In the Worst Actress category, the contenders are Katrina Kaif ("Bang Bang!"), Sonam Kapoor (for everything she did), Tamannah Bhatia ("Entertainment"), Jacqueline Fernandes ("Kick") and Sonakshi ("Action Jackson", "Lingaa" and "Holiday").

In the Most Atrocious Lyrics category, Sameer for "Caller Tune" ("Humshakals"), Shabbir Ahmed for "Ice Cream" ("The Xpose"), Yo Yo Honey Singh for "Sunny Sunny" ("Yaariyan"), Vishal Dadlani for "Tu Meri" ("Bang Bang!") and Mayur Puri for "Johnny Johnny" ("Entertainment") have been nominated.

For Why Are You Still Trying Award, Sonam Kapoor, Jackie Bhagnani, Himesh Reshammiya, Subhash Ghai, Ayushman Khurana and Yami Gautam have been nominated.