This week Nach Baliye 3 introduces to us the 'Bachpan Round' for the first time ever!!!!, where all the 4 Jodis have to dance on kiddie numbers.

The 3 judges get new roles, the hugely talented choreographer Vaibhavi Merchant turned Principal, the beautiful Isha Koppikar turned to a teacher and our very own comedy director David Dhawan gets to be the school Dean.

The kiddies round this week, made Krushna - Kasmhira to dance on a very cute number, where both of them were dressed up as sardars. All the judges were very impressed, especially Vaibhavi.

Aamir - Sanjeeda danced on Kuchi Kuchi Rakma (Bombay), and looked adorable as dolls. David Dhawan made a very cute comment on Sanjeeda, by saying if he had a 3rd daughter, it would be Sanjeeda, and he said that Aamir looked like an overgrown child!!!!....

Next up was Karan- Amita, a round so apt for Karan, who has been called the naughty boy on Nach.. But unfortunately, their performance didn't impress our judges, the judges felt that Karan didn't show his full ability in this performance.

Last , but not the least, Abhishek-Rakhi, performed on 'Lakdi Ki Khathi' (Masoom), wherein Abhishek was a boot polishwala & Rakhi was a Gajrawali. Their performance impressed the judges very much, as results both Vaibhai and Isha gifted them lollipops & balloons!

Finally Vaibhai announced something which made all the choreographers dancing on their seats, she announced that after the final episode, she will choose the Nach Best Choreographer , and that privileged choreographer will get a chance to travel to Europe along with her & her Merchants of Bollywood Crew!

Don't miss this fun full episode, only on Star Plus, this Saturday 8th December at 8pm…. 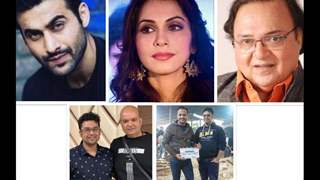 Isha Koppikar to be seen in Ullu's new series

+ 2
14 years ago omg that is so cute
im gonna watch this round for sure
hussain-tina look so adorable in uniforms... sanjeeda already looks like a baby and amir - an overgrown baby LMAO

Looking forward to the episode :)

14 years ago
Congrats to all contestants

14 years ago wow... as always RA and pratap shetty chose different concept from others....

14 years ago husein tina just look..muah..they r too cute to comment on!!