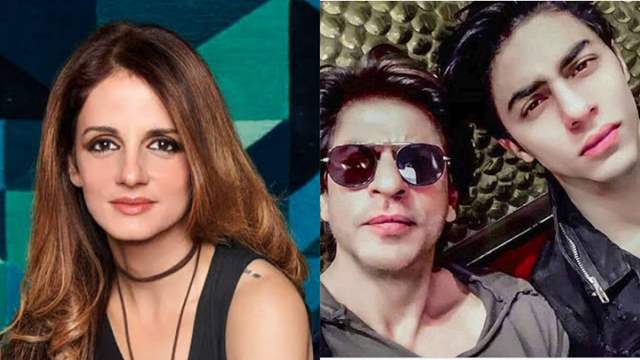 Many celebrities from the Bollywood industry have lent support to Shah Rukh Khan and his wife Gauri Khan ever since their son Aryan Khan was arrested from a surprise cruise raid on Saturday.

Much like politician Shashi Tharoor, Sussanne called out the 'witch-hunt' against the star kid.

She declared that she stands by Shah Rukh and Gauri and their son was just at the wrong place at the wrong time.

Aryan was arrested by the Narcotics Control Bureau after the anti-drug agency raided a Goa-bound cruise where the star kid was present.

Sussanne took a dig at columnist and journalist Shobhaa De who argued that Aryan's arrest should be a "wake-up call for the parents".

"I think this is not about Aryan Khan, as he was unfortunately at the wrong place at the wrong time, this situation is being made an example to drive home the excitement that some people get as they have a witch hunt on people from Bollywood. It’s sad and unfair as he is a good kid. I stand by Gauri n Shahrukh".

As for Shashi Tharoor, in his post, he supported the Khan clan and urged all to have some empathy for the family.

Previously, Salman Khan and later his sister Alvira Khan Agnihotri were spotted paying a visit to the Khan family at their bungalow during their difficult time.

Apart from them, it was also Sanjay Kapoor’s wife Maheep and Sohail Khan’s wife Seema who were snapped visiting SRK at Mannat.

Aryan was arrested with two others, Munmun Dhamecha and Arbaaz Merchant on Sunday evening after banned drugs were allegedly seized from the cruise ship.

The star kid and the two others' NCB custody has been extended till October 07, 2021

3 months ago He isn't a baby alright. SO why was he even at such a cruise ship where drugs were being introduced. Much more to the story than what these celebs are trying to say. Teach your kids to make good decisions in life....Parents can only do so much. Hope this will be a lesson to all the young Bollywood star kids.