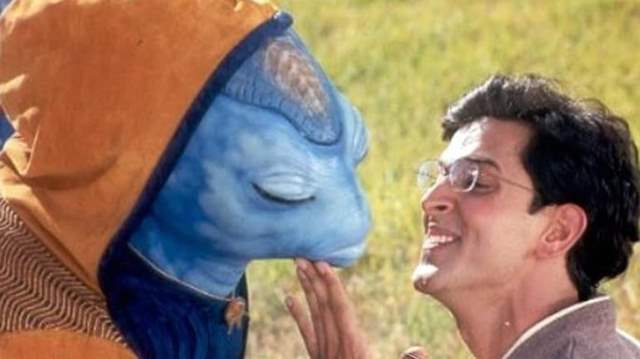 When Koi... Mil Gaya released 17 years ago, it was something that Indian cinema had not seen before. The film and especially Hrithik Roshan’s performance was appreciated by audience and critics alike. It was one of the few films that kids, adults and elders, all enjoyed together.

Hrithik played the role of an overgrown child with special needs and surprised everyone. It was a role that one would not imagine someone as good looking as him to play, at the peak of his career. But he pulled it off like no one else could.

The alien in the film, jadoo also connected with the audiences on a huge level and Hrithik has beautiful captured his character, Rohit’s friendship with jadoo in the video that he posted on his social media to mark 17 years of the film.

With the song, ‘You’ve got a friend in me’, Hrithik showcased adorable moments of friendship between his character and jadoo in the film.

He took to his social and wrote, "Some friendships defy space and time. Someday hopefully soon they will meet again .#koimilgayaThank you Papa for having the courage to do this when everyone thought that you had lost your mind. Thank you for trusting and having faith in me .And literally would not be possible without you Pree! Friends forever And Thank you Rekhaji for being the rock for Rohit !Love to all of rohits friends . Miss you all .And to my uncle Rajesh Roshan cause without the music there’d be no magic ! .Thank you to the entire team who worked BTS on this dream.Miss you jaadu.@rakesh_roshan9 @realpz @farahkhankunder @ganeshhhegde .#17yearsofkoimilgaya"

6 Iconic Dialogues Every True Mirzapur Fan would Use in Real ...
11 minutes ago

Yami Gautam and Vikrant Massey collaborate for Mohsin ...
47 minutes ago