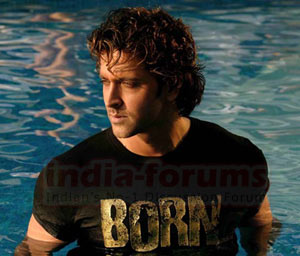 News of Superstar Hrithik Roshan nursing his bad knee has been circulating for quite a while now, but not many know that the actor had been neglecting treatment so far, in spite of his doctor & physiotherapist's instructions!
Finally though Hrithik has given-in to their advice and the actor is off to Singapore for 6 weeks of rigorous recuperation.
Owing to some action packed performances in Krrish & Dhoom 2 , Hrithik had torn the ligament in his right knee and all though it caused him tremendous pain, Hrithik refused to yield and continued working, the professional that he is. In spite of his doctor's advice for No strenuous movements or exercise, he went ahead and completed the painstaking training, traveling, shooting- required for his forthcoming film Ashutosh Gowarikar's Jodha Akbar!
That was not all; the Jodha Akbar shoot got extended due to which all his ads got delayed. Hence once more the treatment of his knee took a backseat as Hrithik completed his commitments towards the brand relationships since even they have their own immense pressures. As a result, the knee did not get enough rest to recuperate and hence now the situation is such that it has become essential for him to put all the work on back burner and go abroad for complete treatment. In fact his new movie shoot has also been delayed because of the treatment now.
Says Hrithik, "While working towards fulfilling my commitments to all my work - ads & film, I did not much care about my knee pain & have neglected my doctors advise to not put any stress on it and take complete rest if I wanted it to heal."
However, going by the present condition, he thinks it's best to take a 6-week break and recuperate fully rather than stretch it further to the point of non-repair. "I am giving my health a prior importance now, so that none of my further committment suffer in the near future ", adds the star known for his perfectionism.
So off he goes to Singapore, for 6 weeks.well, we hope Hrithik returns soon, fitter than ever!
Featured Video