View Profile
It's no surprise that Vidya Balan, the talk of tinsel town after having given two consecutive hits in the form of The Dirty Picture and Kahaani within a span of a few months, 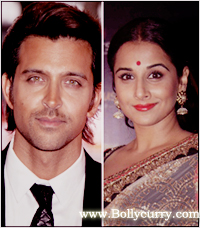 has filmmakers lined up at her door in hopes of casting her in their upcoming project. Also, the subject of much industry intrigue is the fact that Karan Johar has bought the rights of  Amith Tripathi's The Immortal of Meluha, a trilogy of novels that blends fantasy and mythology to tell a tale about Lord Shiva of the Hindu pantheon. The latest buzz from B-town has both these factoids coming together in a way that is sure to give audiences something to look forward to!
Yes, it's true! When asked about whom he would like to cast in this grand venture, the successful director-producer desperately wants none other than Vidya to essay the role of Devi Parvati. To portray the character of Lord Shiva, he has shortlisted heartthrob Hrithik Roshan with whom he collaborated on his latest blockbuster Agneepath.
If all goes Karan's way, the film is likely to make a huge splash on the strength of this unconventional pairing alone; here's hoping that he gets his wish that we, too, would love to see fulfilled!