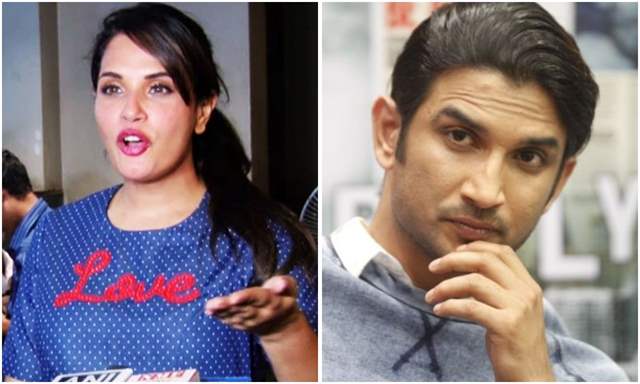 Sushant Singh Rajput's untimely death has raised many questions about Bollywood's work culture and the celebrities have found themselves under a radar. While Sushant died by suicide on June 14 2020, professional rivalry and negligence within the showbiz has also come to the surface as one of the many reasons that may have pushed the late actor to the edge of taking his own life.

Many A lister celebrities like Karan Johar, Alia Bhatt, Salman Khan, Sonam Kapoor Mahesh Bhatt among others are facing the wrath of trolls in connection to Sushant's suicide. Recently, actress Richa Chadha was questioned about her silence on SSR's case, to which she gave a befitting reply.

A user asked Richa "Why are u people so silent about seeking justice for Sushant? Had u all kept so silent if it had occurred with u??" Reacting to the same, the actress lost her calm and hit back at the user with a reply that read:

"exactly how are we 'keeping quiet'? How dare you suggest that ? You know that the police is investigating the matter and everyone is cooperating by providing statements and clues. Trolls like you ignore the role of mental health in this scenario, going after his real friends, harassing them...for what? And you call yourself a doctor ? What if someone kills themselves because of trolls like you ? Should you be booked for abetment to suicide? F**k off please for insinuating that anyone at all is keeping quiet. You're a disgrace to his memory." 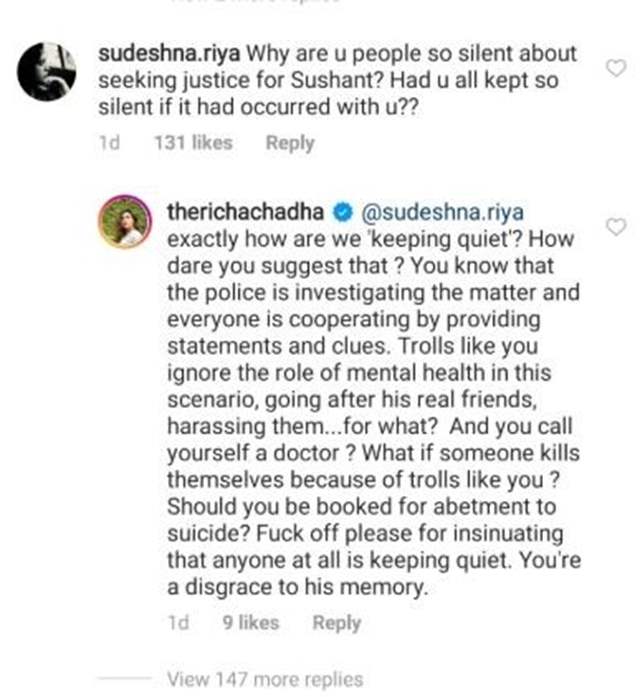 Sushant Singh Rajput ended his life on June 14 2020 by hanging himself at his Bandra residence in Mumbai. Several reports suggest he was suffering from depression and professional rivalry is also being probed in the matter. The Mumbai Police is investigating the case closely and has recorded statements of over 30 people including Mukesh Chabbra, Rhea Chakraborty, Sanjay Leela Bhansali, Sanjana Sanghi, family members among others.

Sushant’s sister Shweta is Proud of her brother as he says, “Whatever ...

LeviOsAa 1 months ago This is the limit now, I know that his fans are devastated due to his death but picking up every individual from the industry, trolling and blaming them is highly not done. They are talking about the abuse and are abusing everyone

Even after seven decades of independence, are we really ...
-37 seconds ago