View Profile
There have been enough speculation on Kareena Kapoor's crash dieting and enough stories about her fainting on the sets. All these rumours are just that – rumours. Kareena's Nutritionist and Dietician, Rujuta Diwekar, has revealed the true story of the actor's diet and eating habits. Kareena met Diwekar in May 2007, and the latter has been the actor's 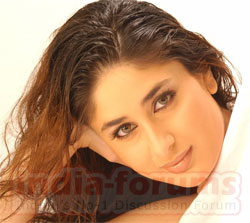 Featured Video
dietician since then.

Apparently, Kareena gave Diwekar a brief about her character – that she had to be lean and sexy. Diwekar knew that Kareena is a pure vegetarian, and wondered if she could lose the required amount of weight by going on a vegetarian diet. She put the actor on a diet that consisted of healthy nutritious food. Kareena has been eating parathas, momos, cheese, pasta, bananas and other food that are perceived as fattening.

"Contrary to reports in the media, Kareena did not starve herself, and neither did she subsist only on orange juice. There were also stories that she fainted on the sets, but that is not true," says Diwekar, adding, "What worried Kareena was that her fans, especially teenage girls who look up to her as their icon, will blindly follow the false articles and emulate her. The results can harm them in some way or the other. Kareena did not want that to happen, and thus this clarification."

According to Diwekar, the actor wants her fans to know that she has achieved her super sexy body, over a period of time, by being dedicated and disciplined about her fitness and eating habits. "She is massively into a strict regime of yoga, which she practices for almost two hours a day. She loves the way she is looking now, just like a Hollywood star," Diwekar concludes. - (SAMPURN)