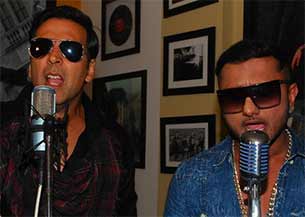 "Dildaar and yaaron ka yaar" is how Yo Yo Honey Singh likes to describe himself. He proved this recently when he flew back from his US tour for some very special recordings for the new Akshay Kumar-starrer "Shaukeen".

Akshay, who has repeatedly collaborated with Honey Singh in the past, requested the rapper-performer for one special number in the Abhishek Sharma-directed remake of Basu Chatterjee's "Shaukeen". In the new movie, Akshay is paired with Lisa Haydon.

The rapper insisted on doing three songs instead of one.

"Anything for a friend. And there are two stars in Bollywood for whom I'd do anything. Akshay and Shah Rukh bhai (Shah Rukh Khan) are like my brothers. When Akshay requested me to do one song, I told him, 'Ek kyun, teen le lo (Why one, take three)'. I feel my tuning with Akshay is such that he is able to put a face to what I sing as effectively as I do," he said.

Honey Singh also flew down specially to be with his other favourite Shah Rukh Khan in Abu Dhabi last week for the IPL match and the after-party.

"I was in Dubai when Shah Rukh bhai invited me for the match and the after-party. It was fun unlimited," he said.