Mumbai, July 8 (IANS) John Abraham is set to get even more stylish. The actor's costumes for director Abbas Tyrewala's film '1:800 Love' are being chosen by Hollywood stylist Suzie Harman in London.

The posh Suzie Harman, who dressed up Gerard Butler in Guy Ritchie's 2008 blockbuster 'RocknRolla', will not only be doing the clothes for John but for the entire cast of the film that will be shot in London. 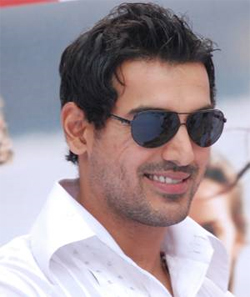 Though Abbas, who made the hit 'Jaane Tu...Ya Jaane Na', refused to divulge any details, producer Madhu Mantena confirmed that the international stylist has been roped in.

'Yes, Suzie Harman is on board. How we got her is another story. All the crew of '1:800 Love' barring the cinematographer is from London,' Mantena said.

Suzie Harman, who has done the entire styling for more than a dozen top British and American films, has been shopping at London's pricey Harrod's store for John. And she has pulled out all stops in getting the right clothes.

'My director Abbas has no hair to tear. But I'm about to go bald worrying about the clothes budget. And it's not just John,' Mantena added. 'She's dressing up the entire cast...all the characters including the leading lady Pakhi (Tyrewala) and, of course, John.'

Apparently the clothes budget for Abbas' film has already shot up three times over. But the producer is not complaining.

'I trust Abbas' judgement completely. And yes it looks like the film will be much costlier than I thought. But good things don't come cheap.'