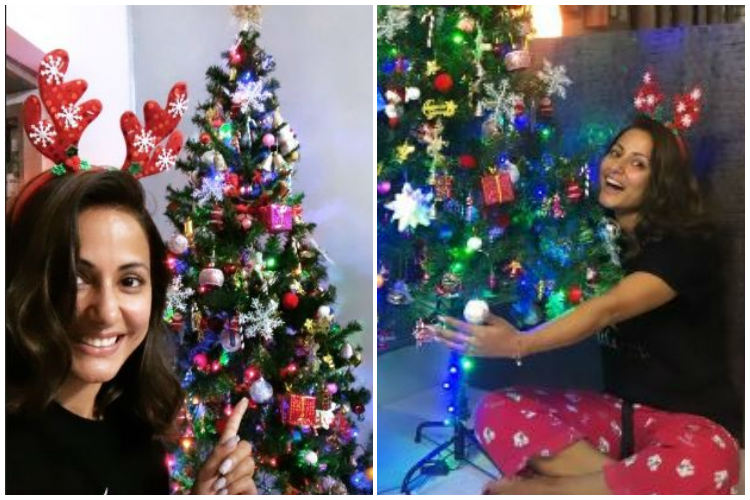 TV actress Hina Khan is finally back in Mumbai after shooting for her debut Bollywood film titled 'Lines' in Kashmir. TV's new 'Komolika', who will soon re-start shooting for Ekta Kapoor's 'Kasautii Zindagii Kay 2', is currently spending quality time with her loved ones. The festival of Christmas is only a few days away now & the 'Yeh Rishta Kya Kehlata Hai' actress is already excited for the same.

The 'Khatron Ke Khiladi 8' runner-up recently kick-started the celebrations & decorated a Christmas tree at her home. Yes, her Christmas tree is ready & Hina Khan posted few pictures on her social media account which prove that she is too excited for the festival.

From shopping, decorating the Christmas tree with beau Rocky Jasiwal to posing with it, Hina Khan posted several pictures on Instagram. In the pictures, Hina Khan is all smiles while posing with her X-Mas tree & looks super-happy.

Check them out below:

On the work front, Hina is at the top of her game post her stint in Bigg Boss 11'. She is set to make her Bollywood debut with Lines' which is a woman-oriented story. The film is set in the 90s in Kashmir & actor Rishi Bhutani will be seen romancing Hina Khan. Also, veteran actress Farida Jalal is playing Hina's grand-mother in Lines'.

Apart from Kasautii Zindagii Kay', she has also signed on by TV czarina Ekta Kapoor for another show in which the actress will be seen playing the positive lead role.

Coming back to Hina's latest pictures, the actress has surely made the festival of Christmas merrier for her fans!