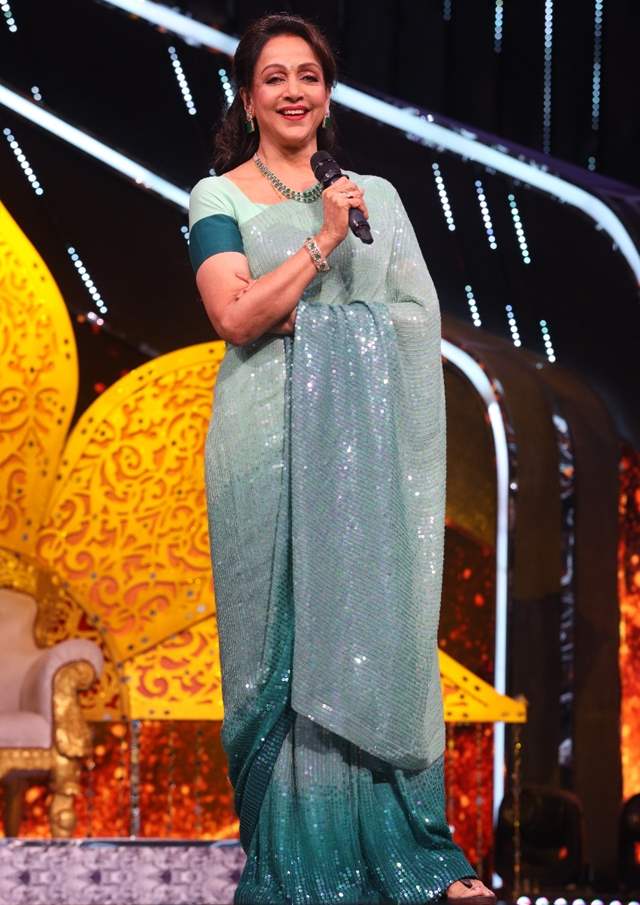 This weekend Indian Idol invited the evergreen and the original dream girl Hema Malini to grace their show and the veteran actress made sure to make her presence felt and give the audience and everyone a fun-filled episode.

While her stay on the sets, Hema made sure to entertain everyone by giving them old anecdotes and reminiscing the old golden days of her various shooting days.

During the shooting, Sayli gave scintillating performance on the songs "Waada toh Nibhana" and "Hawa ke saath saath". Her performance made everyone in awe of her melodic voice. Post her performance she asked the special guest Hema Malini about her role in Sholay and especially about the scene where she was seen dancing on the glass.

To this, Hema Malini revealed it was plastic where she was dancing on, but the expressions were the highlight of the entire scene.

She further revealed that,

Sholay is a cult movie but I must add that it was one of the toughest roles I had acted because of various conditions. Majorly I was shooting barefoot that to in Bangalore in the month of May. The floor was always very hot and walking barefoot was very tough especially if you are shooting in the afternoon. Weather conditions made the shooting a little difficult than normal but overall experience of shooting with everyone would always be cherished.

There was a time when singing was considered a hobby but with time singing transformed into a full-fledged career. If the person is talented and hardworking then nothing can stop them from becoming a recognized singer. To make this dream of many aspiring singer true Sony Entertainment television started a show named Indian Idol and now Indian Idol has become a legacy.

Every year contestants from all over the country gives audition to make their dream of becoming a singer true, but only few gets the opportunity to be on the golden stage.!