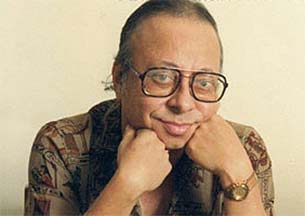 "For a composer as talented as Pancham to be almost jobless was a living death. Pancham was very unhappy. He would sometimes share his grief with me. I feel sad even now when I recall how cruel the industry was to Pancham just because some of his music didn't do well," she said while sharing how unhappy R.D. Burman was during his final years.

Born to the rising star in the musical firmament, S.D. Burman in the year 1939, Pancham revolutionised Hindi film music since he debuted as a composer with comedian Mehmood's 1961 movie "Chhote Nawab".

Lata acknowledges her love and debt for the departed composer and says her brother-in-law "was immensely talented and could compose in any style."

"... he knew exactly which song to give to which singer. If he gave my sister Asha Bhosle 'Piya tu ab toh aaja', he gave me 'Raina beeti jaaye'. He also gave me 'Naam ghum jayega chehra yeh badal jayega'..This is the signature tune of my career," she added.

Burman's last work was seen in "1942: A Love Story", which was released after his unfortunate demise in 1994 and Lata gets emotional as she recalls the meomories while singing for the film.

"... It was twice that my recording for Pancham for '1942: A Love Story' got postponed. Finally, I was in Delhi when I heard he passed away. I recorded the song 'Kuch na kaho' posthumously for Pancham with a heavy heart... If Pancham had lived, he would have been so happy to see his songs used so beautifully."

Lata feels that "Pancham was reverent."

"He saw me as his father's artiste, but when we recorded he was a colleague. And if Kishore-da (Kishore Kumar) was with us, then it was full masti (fun). We had great fun. And his songs have withstood the test of time. Only two music composers from Hindi cinema have attained such enduring fame after death. Pancham and Madan Mohan," she said.