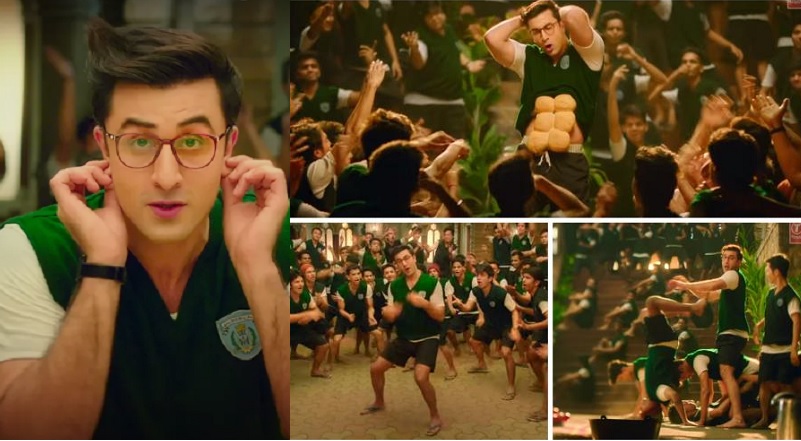 Ranbir Kapoor's Galti se mistake, the second song from Jagga Jasoos is out now. And its impossible to take your eyes off Ranbir Kapoor!
The peppy dance number will make you fall in love with Ranbir Kapoor as he will leave you charmed with his innocence.
Watch the song here:

Ranbir Kapoor has pumped the level of dance with this new effortlessly energetic dance number. His mind boggling moves doubled with his naughty expressions make the song a visual treat for everyone.
The foot tapping music will get you grooving and the lyrics will get you hooked. It won't take long to see people humming this tune everywhere.
Interestingly the new song from Jagga Jasoos marks the first on screen appearance of director Anurag Basu. The duo could be seen having fun on screen as Ranbir tears off Anurag's shirt.
The Ranbir-Anurag duo is set to recreate the magic woven by the blockbuster Barfii.
The song was launched at an event that marked the presence of Ranbir Kapoor and Katrina Kaif in addition to director Anurag Basu.
Galti se Mistake song launch event witnessed a fun filled camaraderie between Ranbir, Katrina and Anurag as the trio was seen goofing around, photo bombing eachother and pulling fast ones on one another.
Continuing their series of taking subtle digs was Ranbir, who shared to have taught Katrina all her dance moves from her iconic dance numbers like Chikni Chameli, Sheila ki Jawaani, Mashallah etc. while Katrina took to confess that she was behind Ranbir's exceptional acting prowess as she helped him ace his emotions and expressions as an actor.
Director Anurag Basu also shared that Ranbir is the greatest Jassos when it comes to the industry.
The event had in presence Co-Producer Amrita Pandey of Disney India, Bhushan Kumar, Anurag Basu, Ranbir Kapoor, Katrina Kaif.
The first song from the film had already become the talk of the town with the crackling chemistry and synchronized dance moves by Ranbir Kapoor and Katrina Kaif. The second song comes out adding yet another visual treat.
Trailer of the film was widely appreciated especially for its musical conveyance without any dialogues.
The newly released songs have only churned the excitement of the audience for the already highly anticipated film.
Disney and Pictureshuru Production's Jagga Jasoos is directed by Anurag Basu and is set to release on 14th July 2017.
0 Likes

Deblina Chatterjee to be seen as Lakshmi in Vighnaharta ...
12 minutes ago

Here’s why Akhilendra Mishra initially denied playing the ...
14 minutes ago

Sushant Searched about Painless Death, Trouble in ...
21 minutes ago

Rishina Kandhari talks about resumes shooting, her perfect ...
43 minutes ago

Yeh Rishta Kya Kehlata Hai: Kartik to take care of his ...
54 minutes ago

Sushant Singh Rajput fans gear up for a second round of ...
54 minutes ago