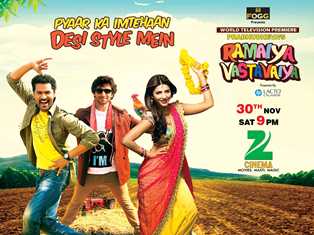 Carrying on its spree of premiering the hottest new movies, Zee Cinema is all set to premiere the Prabhu Deva-directed romantic comedy Ramaiya Vastavaiya' at 9 PM on Saturday, 30th November.

The songs of the movie have been a rage with the audiences all across the country, what with Jadoo Ki Jhappi and Jeene Laga Hoon going on to become chart busters following its theatrical release. With the movie all set for its world television premiere on Zee Cinema, the channel has released a special mash-up of all its hit songs on radio!

Lata 9 years ago if its choice b/w the too....no doubt it should be Sameer all the way

if its betweeen him and ashmit!

Ilovemsk 9 years ago sameer all the way <3
he should defo win....

ehaab 9 years ago if this article is true then ashmit will win big boss i am 100%. i want shweta to win.

chahat4u 9 years ago Sameer is the better contender and participant.

periphery 9 years ago If it's between Sam and Ashmit , then undoubtedly Sam is the deserving one.

Deepika Padukone Arrives at NCB, to be Questioned over ...
35 minutes ago