It doesn't matter if you have two left feet, you can still dance, asserts ace choreographer Shiamak Davar, who cites Bollywood star Abhishek Bachchan as the best example of this.

Despite his 'not-so-great' dancing skills, Abhishek went on to give rocking performances in songs like 'Nach baliye' and 'Dhadak dhadak' thanks to Shiamak. And the dance guru says he'll ensure the actor exhibits the same level of confidence during the Bachchans' 'Unforgettable' world tour starting in Toronto July 18.

'We'll make sure Abhishek has enough time to 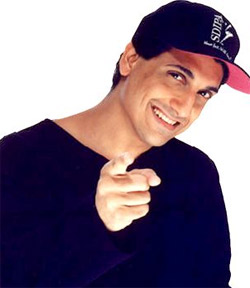 Featured Video
rehearse his act and emphasise his strength as a performer to make him feel super confident, just like all the other stars,' Shiamak told IANS.

'At my dance school we have a motto - 'Have Feet, Will Dance'. It doesn't matter if they have two left feet, we make sure that they look right,' Shiamak said.

Last year, Shiamak staged his show 'I Believe', where he performed with his troupe. The show was repeated in April this year and was attended by Bollywood biggies like Amitabh Bachchan, Aamir Khan, yesteryears' dancing queen Helen, veteran actress Waheeda Rehman and the 1970s glamour girl, Zeenat Aman.

Shiamak, who has choreographed for films like 'Dil To Paagal Hain', 'Taal' and 'Bunty Aur Babli', has become a household name in the country.

While his Shiamak Davar Institute of Performing Arts (SDIPA), which has branches in several Indian cities, caters to the elite, he also believes in philanthropy.

Through his non-profit organisation Victory Arts Foundation, he tries to spread the language of dance to the underprivileged, especially physically challenged and visually impaired children.

Some of these special children performed during 'I Believe' and Shiamak says the audiences were overwhelmed.

He said: 'When I was on stage, I could see those in the audience moved to tears when my special kids were performing. They were the real stars of the show.

'It is important for all of us to cherish our parents, and to reaffirm belief in a bigger power. When I was younger, I thought I was alone, but I was wrong. We all need to believe that someone is watching over us, to rejuvenate our belief in ourselves.'

Shiamak has an optimistic and spiritual approach towards life and says: 'I thank god and my spiritual guides for my success.'

Asked about his dual role of a dancer and a choreographer, he said: 'A true artiste is able to manage admirably both on stage and behind the scenes. This is something that comes with experience, but first you have to believe in yourself and be passionate about what you do.'