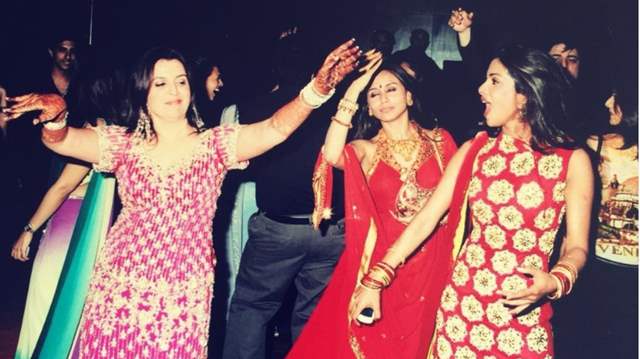 Farah Khan is one of the those who is all about wit and humour. She is an avid social media user who often documents her personal and professional life with her fans and followers. She keeps up with her followers engagement by offering them glimpses at some of the adorable throwback pictures of hers with the B-Town celebs.

Well, today seems to be that day for the filmmaker as she took a trip down the memory lane and shared a throwback picture from her Sangeet ceremony. The highlight of the picture is Rani Mukerji and Priyanka Chopra from their younger days grooving without giving any damn.

While, Farah is clad in a shimmery and gaudy pink dress with golden adornments Pee Cee and Rani can be seen decked in red outfits. Sharing the picture, Farah wrote, "#flashbackfriday .. drunk dulhan dancing at her own sangeet😂 with @priyankachopra n #ranimukherjee.. ( btw had managed to lose my dupatta, necklace n hair extensions).."

Farah had earlier shared this picture along with other pictures from her Sangeet ceremony on her 12th wedding anniversary. In the photographs that Farah shared, Shah Rukh Khan, Abhishek Bachchan, Rani Mukerji, and Priyanka Chopra can be seen dancing, and singing at the party.

Farah Khan has been married to Shirish Kunder, a film editor, since 2004. The filmmaker-choreographer has recently stated that adjusting to their first year of marriage was so difficult for her that she considered fleeing their home.  Farah and Shirish are parents to three adorable kids. Anya, Diva, and Czar.

Talking about Priyanka Chopra's life, she recently made headlines as she welcomed her baby daughter via surrogacy with hubby Nick Jonas. Meanwhile on the professional arena, her next Bollywood project would be Jee Le Zaraa alongside Katrina Kaif and Alia Bhatt.