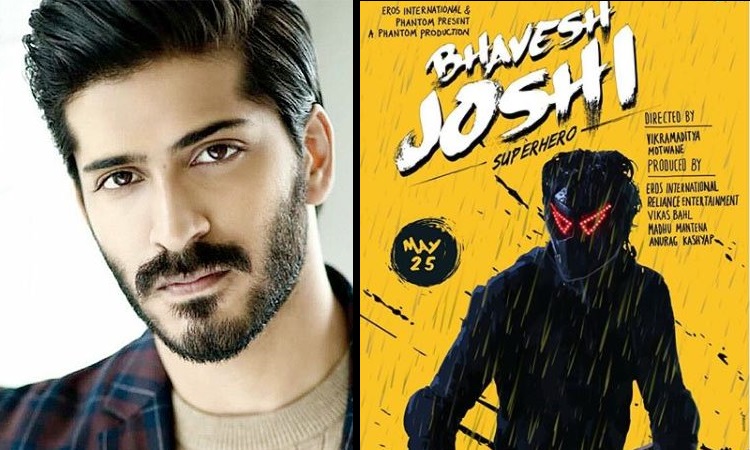 Anil Kapoor's son and Sonam Kapoor's younger brother Harshvardhan Kapoor made his Bollywood debut in Rakeysh Omprakash Mehra's "Mirzya" starring alongside debutant Saiyami Kher in the lead role in 2016. After 2 years now, the actor will be seen in his second film called "Bhavesh Joshi Superman" which has been directed by Vikramaditya Motwane. For almost one and a half years now the actor was said to be rigorously shooting for this film as his debut film couldn't make any wonders at the box office.

Talking about the poster, the actor is surely seen in an action-packed environment but, has worn a black superhero outfit in the poster.

It was reported that the Kapoor will be playing a Gujarati Boy with some special powers in the film but, the actor had denied the reports calling it untrue. However, he had said that it is a hardcore action film. Later a source had revealed a daily, "Harsh's character Siku sports three looks as he transitions from a young college boy to a macho man fighting corrupt politicians and becoming a vigilante of sorts in the process."

Meanwhile, the official announcement of the film was announced in April 2014 and the makers had initially decided on Imran Khan for the lead. The role then went to Sidharth Malhotra but he was eventually replaced by Harshvardhan Kapoor due to frequent delays in the film's pre-production schedule.

Produced by Eros International, Reliance Entertainment, Vikas Bahl, Madhu Mantena and Anurag Kashyap the film is all set to hit the screens on May 25, 2018.