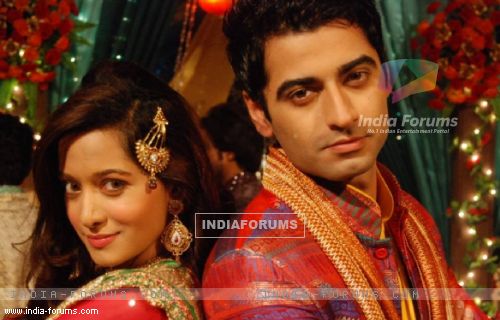 The dashing guy Harshad Arora and pretty girl Preetika Rao who have gained immense popularity among the audience for essaying the character of Zain and Aaliya in Colors' much loved show Beintehaa (produced by Fortune Productions) made their television debut with this show.

Their on-screen chemistry, whether it has been romantic scenes, their roothna-manana or their nok-jhoks have always connected well in the hearts of the audiences. Popularly called as Harshika, Harshad and Preetika share a very friendly rapport with each other off-screen just like Tom and Jerry; always pull each other's legs and tease each other. Though Beintehaa is going off-air but they have given lots of memories to fans to cherish forever and they are taking some with them as well being each other's co-stars.

TellyBuzz quizzed the adorable and fun loving Harshad and Preetika about their journey with each other in Beintehaa, some memorable moments and much more...

How has your experience with each other been?

Preetika - Its been really good. When we started off then we really didn't know each other but as we got comfortable with each other, our chemistry grew. He is a very good co-star to work with and the best co-star probably I could debut with.

Harshad - I think she is correct that she is got the best co-star to work with (laughs) and the same goes to me also that I have got a very good co-star. She is very patient and I really like this about her. I really try to bring this quality of her in myself. Its been a really amazing journey since day one till now; Bhopal, Lavasa, Beintehaa set and all the outdoor shoots all it has been a fantastic journey.

Any crazy off-screen memory with each other?

Preetika - We continued with our jokes and pranks till our last day of shoot.

Harshad - There was an intense scene of Aaliya ji where she tries to come and gets naughty with Zain so Aaliya ji full mood mein aa gayi thi uss time...

Preetika - He was just teasing me saying that 'Mood mein aa gayi ho tum' and I was getting angry on him.

Harshad - Aaliya ji gets involved in her character so much...

So, he keeps teasing you like this all the time...

Preetika - Oh ya ya! I get teased all the time by him whenever I do any romantic scenes with him. He says - Aaliya ji mood mein aa rahi hain and all that.

What do you want to say to the fans who made Zaya so popular?

Harshad - Fans are the guys who made the show, who love the show, who gave the show what it deserves and gave us what we deserve. I would really like to thank them and say to them that we love you guys so much. Its because of you we have, whatever we have today and its because of the love of fans which brought Beintehaa so far. Unfortunately it had to end one day but unexpectedly the day came little earlier than expected but that's the life of an actor that a show starts and then comes to an end.

Preetika - I think any television series should be short and sweet; it shouldn't be stretched too much that the audience gets bored and I am happy that Beintehaa is ending on a right and an interesting note.

Silliest prank you have played on each other?

Harshad - I have played too many pranks on her; everyday.

Preetika - They have been too silly that I have always caught him... I haven't fallen in any of them.

Harshad - No, no... she has! In the middle of a shot, I just tell her that its my 'shot' whereas it used to be her shot. So, the camera is rolling and she doesn't react and used to realize that  after sometime. So, we just used to laugh over it.

Preetika - I can't call it dislike but he has a habit of teasing everybody on the set from the actors to the productions people. So, sometimes we all are like - just stop; you can't keep doing this all the time (laughs). He is a very hardworking actor and a very supportive co-star that I like about him.

Harshad - She has tremendous patience that I really like about her.

Harshad - Yeah! Aaliya ji Devi ji hain... Sarvguun Samppan...!! There is nothing like I dislike about her but she has a very bad habit of laughing in the middle of the shots. She laughs even on smallest things for no reasons.

Preetika - It happens because everybody on the set makes me laugh. Just before a scene starts, they crack some crazy jokes and I start laughing. Everybody else is allowed to laugh but when I laugh, then they question me as why am I laughing.

Harshad - The best part is that she has to laugh in the middle of the shots not otherwise.

Any embarrassing fan compliment you have come across?

Preetika - Yea! A lot of girls write to me that - We have a Girl Crush on you but I have never really heard about this term 'Girl Crush.'

Harshad - There are a lot of girls on the set as well who have a crush on her (laughs).

Preetika - There was a fan who wrote to me that if I was a guy then I would have proposed you. It was really funny (laughs).

Harshad - There was a very weird question a fan asked me once - How do you get rid of acne? I didn't know how to react to that. I said that may be you should talk to your dermatologist (laughs).

Both of you were finalized for some other show before Beintehaa happened. So, what was your reaction when you got to know that you will be working again in Beintehaa with each other?

Preetika - I had a kind of thought that Harshad is destined to work with me because we were earlier finalized for some other show and also when I met him in the audition, somewhere I had this Intuition that may be Harshad will be selected and he was. In between I was told that there is some other guy who auditioned with us is finalized but still I thought that may be he is still destined to work with me and that intuition was true.

Harshad, tell us your favorite scene of Preetika?

I liked her performance where she breaks down in the hotel and she also got an applause for that.

Preetika, which is your favorite scene of Harshad?

There have been a lot of them! His entry as Rocket has been the most striking one. He had put in a lot of effort as an actor.

Any compliment you have received from each other?

Preetika - (laughs) Harshad keeps cracking jokes so much that sometimes it becomes hard to make the difference whether he is joking or actually praising (laughs). Yeah... he calls me Mallika E Cherish, Mallika E Beintehaa and all.

Harshad - Aaliya ji kanjoos hain taarif karne mein but she is a combination of good looks and talents.

Preetika - I am lucky to have him as my co-actor. We didn't know each other before but still our on-screen chemistry came out well.

Any memorable moment with each other?

Preetika - There have been a lot of moments while shooting. Especially Harshad plays pranks and make everyone laughs with his confusing sense of humor.

Harshad - That confusion is just for Aaliya ji (laughs).

Who among you makes the other laugh while enacting any scene?

Preetika - Harshad takes the award here! He cracks a joke and I used to listen from everyone as why am I laughing. Even our directors Maan and Ankur have a good sense of humor and they keep cracking jokes and make everyone laugh.

One suitable word for Harshika would be...

What you gonna miss the most about the other?

Preetika - I will miss Harshad's sense of humor and his confusing taarifon ke pul (laughs).

Harshad - She is a sweet girl. Its hard to find such co-actors. Not everyone understand a joke; they take things personally but she has never ever done that.

Reveal one hidden talent of each other?

Preetika - He can mimic everyone very well.

Harshad - She is a very good singer. Acting to mashallah... but when she sings, it feels as if a nightingale is singing... itna madhur gaati hain yeh..!!

Reveal one secret of each other?

Harshad - Aaliya ji never tells her age to anyone. So, it's a secret.

Preetika - I prefer hiding rather than lying and nowadays even guys don't tell their age. So, why should we tell our age?

Preetika, time to reveal a secret of Harshad...

Harshad - I don't think I am having any secret. Main ek khuli kitaab hun...

Preetika - I don't know any secret about him. He is right; khuli kitaab hain yeh (Chuckles)...

Would you like to work together again in future?

Preetika - Yes, why not!

Harshad - It has rarely happened in television that the lead co-stars have been repeated in some other show. We would definitely like to work with each other in future might not as Zain Aaliya again but with same people.

Preetika - Let's see, if something good will come up our way then would definitely like to be a part of it together.

Fans want to see you back on-screen together. Any message for them?

Harshad - Keep your blessings and keep loving us and always remember that miracles do happen.

Preetika - Yea right! I believe in destiny. Beintehaa was a destined show and we were destined to work with each other. If its written in the destiny then it will happen; if not today then some other day.

Arpitha18 5 years ago My harshika.

My favourite interview..read this so many times...

6 years ago Love you Harshad Arora and Preetika Rao so so sooo much! Harshad n Preetika r the best couple!

+ 3
6 years ago Such A wonderful article this is... Beautifully written...
Luv Harshika /ZaYa

+ 2
6 years ago Love you Harshad Arora and Preetika Rao &lt;3 Wish you all the best in your future endeavors. I will terribly miss Beintehaa and I really hope we get a season 2 with Harshika once again :)

6 years ago Already missing them :(

The cutest interview ever!! I love them :D Preetika Rao and Harshad Arora are the BEST!!!

sunitamjht 6 years ago harshad arora and preetika rao are the cutest sweetest and the best couple in the world...we love u
we will miss the beintehaa love of zain-aliya <3

+ 4
6 years ago i jus cant get enough of this one of the best iv ever love it Harshad Arora and Preetika Rao are the best.. thank you for Zaya.

+ 4
6 years ago Cutest couple around! Love you so much Harshad Arora and Preetika Rao. Thank you for giving us ZaYa and Beintehaa