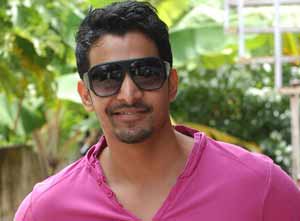 Telugu actor Harshvardhan Rane will Sunday sell all the t-shirts that he has worn on screen. He will sell them at a charity garage sale to support the education of a four-year-old girl.

"I wish to provide better education for Swati. Every t-shirt I ever wore in my movies will be up for grabs, all the proceeds from this garage sale will go towards the funding of little Swati's education," Harsha told IANS.

"There'll also be a photo booth where people can come and take a photo with me. People will get to take home nice shirts as well as acknowledge the fact they've changed someone's life," he added.

Harsha, who has starred in films such as "Avunu" and "Prema Ishq Kaadhal", hopes he can take the sale to other cities as well.

He is currently awaiting the release of "Anamika", the southern remake of "Kahaani".

Nawazuddin Siddiqui Waited 20 Years to Work with Sudhir ...
10 minutes ago

Rakul Preet Singh confesses to being a part of drug chats ...
40 minutes ago