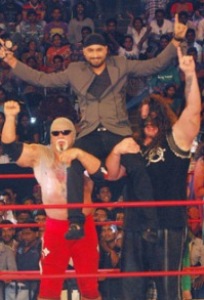 After Bigg Boss Season 5, Colors TV had once again joined hands with Endemol production house to bring in one more reality show which was on halt since a few months. But now, this show titled Ring Ka King – a wrestling reality show is set to hit the channel from 28th of this month, every weekend at 8:00 PM.

Bhajji chats about why he chose this show, interacting with wrestling superstars, his liking for the sport and many more things in conversation.

Being a cricketer, why do you opt for this wrestling show?
Why not? The reason is that I am getting a chance to see and work with such international wrestling stars. I love sports. I don't miss the chance to see different sports whenever I get the time. In fact, when I was in Australia last time, I got a chance to see F1 race. For the first time, such big wrestlers are coming to India and such a big event is happening then why should I not be part of it.

Will the audience see you in every episode?
No, not always. But whenever they need me as a goodwill ambassador, I will be there on the show. It depends on when they require me. To be honest, I don't know.

Do you follow wrestling?
Yes, I do follow wrestling since childhood because I was a crazy fan just like any other kid when he sees fights on TV. I would ask my grandpa about some wrestling stuff instead of something else. I have seen Jarrett's fight when I was small and at the show's launch, I was standing beside him. I am overwhelmed and happy to be with him.

What attracted you to take up this particular show instead of any other reality show?
There are three reasons why I took up this show. Firstly, it is not that time consuming; I can continue doing other things along with this. Secondly, it's related to sports. Thirdly, I had some time off in between.

Are there plans to produce any show on the small screen?
I have already produced for small screen with Dance India Dance season 1 which went pretty well. Now we are not associated with it. But I like to do something different than what is going on currently on television. In fact, it's a challenge.

Who is your favourite wrestler?
My favorite Wrestler is Dara Singh.

Which genre would you choose if ever you decided to participate or judge any show?
I don't mind doing anything but at the moment I am sticking to what I do, which is cricket. Cricket would be my priority for the next 5- 6 years as I should be playing for India. After that, I would love to do something on television. I did with Ek Khiladi Ek Haseena earlier with the same channel and I am thankful to them for giving me this opportunity.

Have you interacted with these international wrestlers?
Yes, we do. Basically, when two sports people meet each other they just want to know how they get energy to play their respective game and explore more about the same. They ask me about cricket because they never play cricket. Similarly, I ask them about being so huge because I have never been into wrestling. They get scared with the speed of the ball but I get scared seeing their size.

How far is this wrestling real?
I can't say anything on it as I have never been into wrestling but it's all about the game of mind. Courage is something which matters; one has to be courageous enough to tackle the competent.

What will be the winning prize for this show?
The one who wins will get 'Ring Ka King' winning belt for which they are fighting and I hope an Indian will win this title.