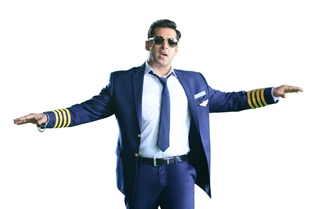 Actor Salman Khan, who is gearing up with "Bigg Boss" season 8 says his rival Shah Rukh Khan will promote his film "Happy New Year" on the show.

Asked if Shah Rukh will promote his film in "Bigg Boss", the actor said: "'Happy New Year' team will promote their film in 'Bigg Boss'. Why will they not come? They have already started their PR here."

While Salman's close friend Aamir has challenged Salman to do what he did in the "P.K." poster, Salman laughed: "Main 'PK' bolunga. Aamir is now roaming with i-Pod... he has sold his transmitter."

The actor also felt his friend Sanjay Dutt should be in the house.

Asked whom would he like to see in the 'Bigg Boss' house he said: "I would like to see Sanjay Dutt in 'Bigg Boss'. He is so interesting but I am sure he would go back there (jail) from here (Bigg boss house)... its too difficult to be in the house."

6 years ago Sanjay Dutt, hope we get to see u soon too !
Salman Khan, waiting for u n BB8 !

+ 6
9 years ago Its a Huge Responsibility to make a Movie on HE STAR Rajnikant ... Atul must be very careful in this one