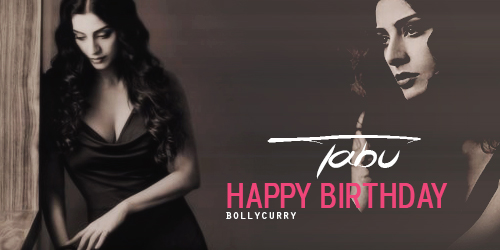 Well known for choosing films that garner critical acclaim rather than films that set the box office ringing, veteran actress Tabu celebrates her birthday today. On this occasion, BollyCurry takes a look at her journey so far.


Tabu was born on 4th November 1971 to Jamal Hashmi and school teacher, Rizwana in Kolkata, West Bengal. Tabu completed her high school education at St. Ann's High School in Hyderabad. In 1983, she moved to Mumbai and studied at the prestigious St. Xavier's College.

Tabu kick started her B'Town career at a tender age of 11 with a cameo appearance in the movie Bazaar (1982). Her first role as a full-fledged actress was in the Southern Industry alongside Venkatesh for Coolie No. 1 (1991). Tabu came into the limelight with Vijaypath (1994) opposite Ajay Devgan. This film earned her the Filmfare Best Female Debut Award for that year. 1996 proved to be a golden year for Tabu, Saajan Chale Sasural and Jeet were both in the top five films of the year.  Her role as a Punjabi woman in Maachis (1996) was critically applauded and brought her first National Film Award for Best Actress. Furthermore, Tabu established herself as a leading lady in south with films like Kalapani, and Kadhal Desam. In the late 1990's her films such as Border, Virasat, Biwi No.1 and Hum Saath Saath Hain did extremely well. In the 2000's her films Hera Pheri, Astitiva, Chandini Bar, Maqbool, Fanaa and Cheeni Kum were extremely well received and fetched her nominations for numerous awards. She featured in Hollywood's Life of Pi (2012) and did a couple of other movies down south. She returned to mainstream Bollywood in 2014 with Salman Khan's Jai Ho. Her latest venture was Vishal Bhardwaj's Haider which was critically acclaimed and did moderately well at the box office. She was also awarded the Padma Shri in 2011.

Her upcoming projects include Meghna Gulzar's Talwar and an untitled project produced by Manoj Bajpai.

On this day we bring to you a mini playlist of Tabu's hit songs:
Do you think you know Tabu well enough? Take the mini quiz below to find out!

Trivia Quiz
This BollyCurry writer signs off after wishing the accomplished actress a very happy birthday and best wishes for her upcoming ventures.

Writer: Nisha M.
Editor(s): Shreya S. and Sonia R.
Graphics: Virina R.
Do you have a suggestion or comment for BollyCurry? Drop us a PM at BC_Dropbox today!