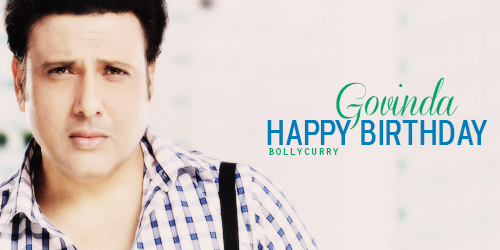 Today marks the birthday of a famous Bollywood dancer, trendsetter, and versatile actor. Any guesses? Yes it's the birthday of Govinda! BollyCurry joins together with fans across the world to celebrate his birthday today.

Govinda holds the record of signing maximum films. He has been paired with actors like Shakti Kapoor, Kader Khan, Johnny Lever, Sanjay Dutt, Anil Kapoor, and Paresh Rawal, all of which always turned out to be successful ventures.

He has tried his hand in politics and served as a MP. Govinda lent his voice in the movie Delhi Safari (2007) and made a cameo appearance in Tamil movie, Three Roses (2003) after which he made a Bengali debut with Samadhi (2013). Govinda has further tried his hand at singing with his first track being "Meri Marzi" from Gambler (1995). He then went on to release 2 albums: Govinda (1998) and Gori Tere Naina (2013).

Govinda currently has Hero and Jagga Jasoos in his kitty. Both are expected to release in 2015. There are also several delayed films expected to be released in 2015. They are Abhinay Chakra, Avataar, Afra Tafri, Banda Yeh Bindaas Hai, and Run Bhola Run.

On the special occasion of his birthday here is a playlist of some of his popular songs:
On behalf of BollyCurry and all the fans, here's wishing this multi-talented actor a very Happy Birthday with bright future and success in every endeavour!