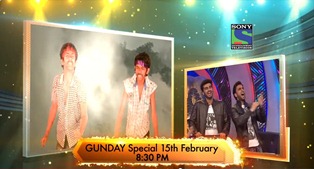 It was a laugh riot on Sony TV's Boogie Woogie Kids Championship as Ranveer Singh, Arjun Kapoor and Priyanka Chopra howled, cried and jumped off their seats with laughter after they witnessed a spoof of their movie 'Gunday'.

This 3-minute video titled 'Gwaley' is a hilarious take on their movie featuring Aryan and Sagar playing the lead along with Preetjyot essaying the negative character.

The video left Arjun and Ranveer so amused that they off their seats and started jumping; unable to control their laughter. Ranveer even picked up his chair to express his emotions. Dialogues like, "Agar Jigar ke jagah jigar hain, aur jigar mein Ajay Devgn hain", had the actors rolling on the floor and laughing their guts out.

Arjun and Ranveer were really impressed with this spoof and even congratulated the creative team for their ingenuity and demanded for a copy of this video so that they could upload on various social networking sites.

Looks like the Bollywood Gunday's have a stiff competition with the Gwaley's of Boogie Woogie!