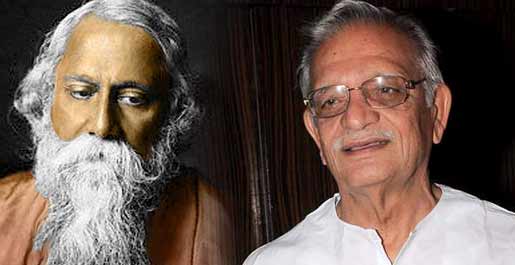 Reading Nobel laureate Rabindranath Tagore's works was a "turning point" in his writings, acclaimed lyricist Gulzar said on Friday and lamented the absence of the bard's creations in Indian school textbooks.

"I wish Tagore be taught in schools all over India. That is the desire I have. The way I learnt from Tagore in my school time, I wish this to go all over India and Tagore should be taught through school textbooks. There is no presence of his in textbooks... That should be done," he told the media here after being conferred the honorary Doctor of Letters degree by Rabindra Bharati University (RBU) at its 40th annual convocation.

Noted cartoonist Narayan Debnath also was conferred the honorary degree on the occasion.

Gulzar, an Oscar and Grammy Award winner, expressed his reverence for Tagore's writings and said he learnt Bengali to read him in original.

"Tagore has been a turning point in my writing. It is because of Tagore that I started reading Bangla, to read Tagore in original I learnt Bangla," he said.

Gulzar, 80, said he was working on translating two volumes of Tagore's works, which will be published sometime later this year.

"I will be back here to release them," he said.