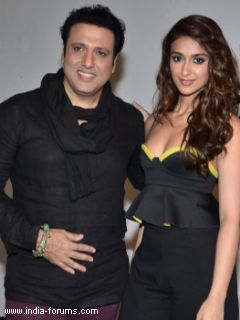 The slim and trim Ileana D'Cruz enjoyed matching steps with veteran actor Govinda in "Happy Ending", and says he asked her to give up red meat for good health.

While actress Parineeti Chopra recently said that nobody can dance like Govinda, Ileana has said she made sure she practised her moves enough before grooving with the comic star.

Talking about her experience working with Govinda, she said: "I was like, 'I am not very good at dancing, not trained and it's not my strong point. Whereas Govinda is known for his dance as well as his comic timing'.

"I was thinking it's not going to go well, so I was very particular about practising my moves. But when we did the shot, I was so relaxed. I completely forgot that I was dancing with Govinda because he is a very normal and relaxed guy."

Ileana was grateful that Govinda was humble, and truly "brilliant" at his craft.