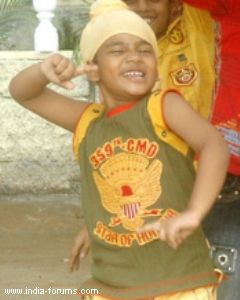 You must have seen the naughty little 'Punjabi Munda' in SAB TV's popular comedy show Taarak Mehta Ka Ooltah Chashmah, produced by Neela Telefilms. The young boy, Samay Shah who studies in Std. 6th, is essaying the role of Gogi who is very naughty and full of energy.

What is Samay's favorite pastime during free time on the sets? While the other kids of the Tapu Sena were busy  gossiping and working on the computer, Samay fell asleep on the chair. A spot boy came to wake him up when the shot was ready but he was not willing to get up. He was requesting him to let him sleep two extra minutes. After repeated attempts by the spot boy, he got up and gave his shot perfectly. In the next break he was seen gossiping with his friends on the sets.

We spoke to Samay who said, "Yes, I love to sleep during the breaks. My school gets over at 12:45 in the afternoon and then I come to the sets for the shoot. After shooting, I go home at around 8-9 pm. If get a little time during my shoot, I take short naps because sometimes I don't get much time to sleep."

It seems like the little warrior of the adorable Tapu Sena is burdened by his busy schedule, but hats off to his efforts and energy which he projects while shooting for the show.

8 years ago I enjoy his PJs all the time.. love TMKOC after a busy day.. perfect show to wind down on and relax.

AnjanaRai 8 years ago I love gogi !! he is so cute and adorable :) xx

cute_sara99 8 years ago love u as Gogi

11 years ago @ aadaa.. the topic here is about imran and avantika .. lol ... they both make a nice couple.. congrats to them and good luck for future ...

parvtwinks 11 years ago this advantika is sooo lucky....hmmm....my one time dream chance of getting married to him is spoilt...drat.....lol! =D love u Imran! <3

11 years ago WTH "aadaa" keep your comments to yourself PLZ!

11 years ago why avantika? why?
so damn lucky :) god bless the couple.