View Profile
MOVIE REVIEW: GOD TUSSI GREAT HO
The lack of marketing and buzz around the movie has made the film God Tussi Great Ho get lost in the crowd even with its great star cast. A remake of Bruce Almighty - God Tussi Great Ho is a fun comedy that brings laughs and has a good message. 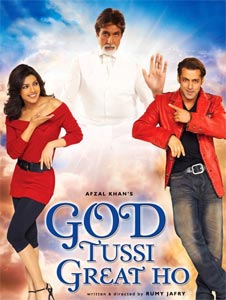 Featured Video
Yet one feels there is so much more that could have been done with a great concept. With a powerful star cast like Amitabh playing the Almighty and Salman and Priyanka in lead roles, there is so much talent which could have been used in the right direction. The first half lacks in substance due to the brainless comedy sequences between Salman and Sohil. The film picks up in the second half but unfortuantely the song sequences that barge in every five minutes become a nuisance keep interrupting the on going plot.

God Tussi Great Ho a story is of the most frustrated human being on earth - Arun Prajapati or AP. Employed by Channel One, AP has such luck that whatever he does seems to go wrong. From his show Maano Ya Na Maano to his family and love life, things are just not going right. An unmarried sister who due to her looks is rejected by all and a father who keeps on complaining about his son's lack of success, AP has a life which just does not fall into place. And he has only God to blame for all the mishaps in his life!

After losing his job, one day AP gets a call from God and goes to meet The Almighty without knowing what he is about to encounter. In anger AP tells God that He does not know how to handle and run the world to which the Almighty says that he will give His powers to AP for ten days to solve the woes of humans. And for the next ten days AP fixes everything in his life from his career to his family problems and even woos Alia (Priyanka Chopra). On the last day with his powers AP decides to fulfill all of mankind's wishes but things backfire and he comes to realize that if God does not fulfill a person's wish, it maybe for their own good. A beautiful message towards the end as Amitabh playing the Almighty tells the viewers to keep peace and goodwill amognst themselves.

The ending of the film is beautiful and will leave the audiences touched. Yet, it is the lack of crispness in the script and the first half which make the film seem much longer than the two and a half hours it is. Some of the songs could have been omitted from the film and many scenes could have been edited towards the beginning of the film.

Amitabh though only has a few minutes of screen presence makes an unbelievable impact! One is just left in awe with the power and goodness that he exerts in the movie. God Tussi is definitely not one of Salman's best films as his acting lacks the power that we have seen in his past great films like Mujhse Shaadi Karogi and Partner. Priyanka is decent though her role does not have much substance. Sohil Khan is annoying and one just wishes he had not been a part of the film. Rajpal Yadav and Anupam Kher have done a great job with their characters.

Overall God Tussi Great Ho is decent film which may not do so well in theaters but should be watched for its message!

Bolly Curry Rating: 2 1/2 Chillies Out Of Five. A movie that drags in parts but has a great message!