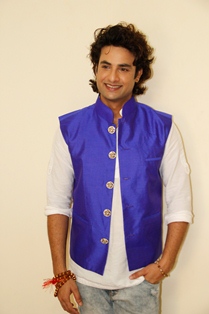 Following reports in the media about actor Yashpal Sharma being cast as the lead protagonist of Zee TV's next weekend fiction show 'Neeli Chhatri Wale',  delving  into a unique friendship between man and God, there has been much speculation about who's playing God! Playing Shivaye is the young and dynamic Himanshu Soni, currently winning hearts with his portrayal of Gautam Buddha in Zee TV's historical biopic on the great spiritual leader. But, make no mistake! Himanshu will not be seen  in the hallowed, much revered avatar of Lord Shiva ... he will make a smashing entry as a  young, smart, contemporary youth wielding a blue umbrella - a friend, philosopher and guide to Yashpal Sharma's character Bhagwan Das!

Set in Kanpur, the story revolves around Bhagwan Das (played by Yashpal Sharma), a middle-class man in his late 30's, constantly torn between his personal and professional life. Forever bullied either by his wife and father at home or his boss in the office, Bhagwan Das is always at the receiving end of flak. Stuck in a rut, Bhagwan Das vents his anger in a unique and funny manner. He Hangs a picture of whoever has misbehaved with him on any given day on a tree outside his house and pelts stones at it. One day, while he is busy letting out his frustration at the tree, a smartly dressed man carrying a Blue umbrella emerges from within the tree and introduces himself as Lord Shiva! Based on the philosophy of God is within us', Neeli Chhatri Wale' is a light-hearted drama highlighting Bhagwan Das and his relationship with Lord Shivaye. Rather than giving him answers, Shivaye has more questions for Bhagwan Das that make him introspect and listen to his own inner voice ...

Himanshu said, "From playing a spiritual leader widely followed across the world to playing Lord Shiva who takes on the form of a contemporary young man and befriends the quintessential common man, it's been quite a transition. I think the role is most intriguing, quite a departure from what I have played on Buddha. I fell in love with the uniqueness of the concept, nothing like this has been attempted before on television. This is my second consecutive show on Zee TV and it has been a great association with the channel. Coming from Ashwini Dhir's school of light hearted dramas, it's a show that is bound to appeal to the audiences!"

6 years ago He is awesome in Buddha, waiting for the new show...