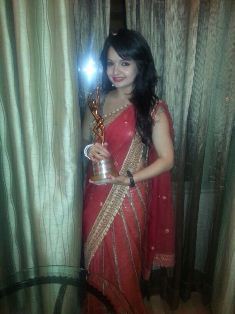 When contacted elated Giaa, who recently quit the show, said, "Two months back, when I was doing Jeannie Aur Juju I got a call from Kalakar award committee. They said they want to give me the award for best actress for the show. Later when I quit the show I called them to inform them about this. I recommended them that they may choose another actress since I am not doing the show anymore. But they said I deserved the award and asked me to come and receive the award."

monash1 7 years ago All the fans of Giaa Manek please tweet, call and mail to Raj Nayak, CEO of Colors that we are dying to see Giaa's new serial on Colors. Please please make a serial for her ASAP.We viewers make your channel number 1

giaafan18 7 years ago Love you giaa. Pls come back on screen

giaa_holic 7 years ago Congrats once again giaa. You are the queen of tellywood.

7 years ago Love you giaa maanek..missing you a lot ...come soon baby...

7 years ago many and many congratulations giaa. Proud to be your fan. Keep rocking. Love you

7 years ago congratulation. luv u gia.luv u so much.