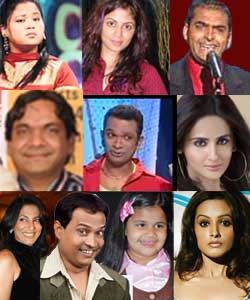 Post the successful season of Comedy Circus Ke Superstar, Sony TV and Optimistyx is all grooved with yet another hilarious season under the aegis Comedy Circus ka Jadoo.

A Little Birdie informs us that, "The show will have the same format but for the first time the show will be hosted by Anita Hassanandani and the contestants duo that have been shortlisted are Kavita Kaushik- Kapil Sharma, Bharti Singh and Sukesh Anand, Maski- Parul Yadav who enacted the role of Poonam in Bhagayavidhta, Rajeev Nigam – Manish Paul and Saloni Daini– Rajeev Thakur."

When contacted, Anita Hassanandani confirmed the news saying, "Yes I am hosting the show and I'm very excited as it would be my first show as a host."

And as every reality show is incomplete without the motivating comments of the judges our source adds that, "As of now just Archana Puran Singh has been confirmed and the co judge is yet to be finalized."

The new season is all set to commence from 4th September.

5 years ago It is one of the best movie and Aamir Khan as alway he is brilliant actor and his acting is fantastic and Asin play a outstanding role in the movie.

12 years ago OMG all Sony show is comedy shows...it gets a bit past humorous sometimes, kinda boring.

+ 4
12 years ago I wish sudesh and Krishna were there

12 years ago Saloni....yet again...does this child go to school then? isnt she being over-exposed on television?

+ 5
12 years ago Nice !! This is the only watchable show...! Thank God Kapil is there....I wish Sudesh-Krishna were there too...But Krishna has a new show maybe thats why he hasnt been retained...But his new show is such a BORE !!