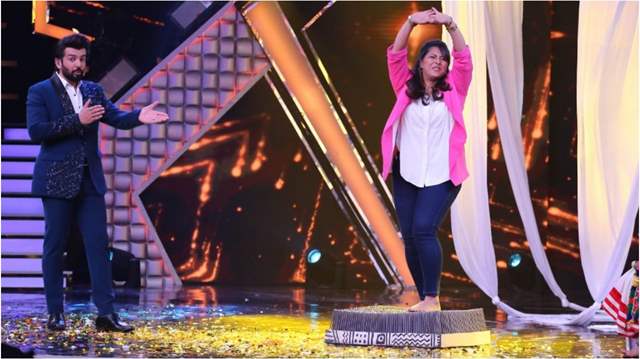 Since its launch, viewers have been having a gala time watching the young dancing sensations put up some wonderful acts’ week after week. This weekend as well, viewers are in for a special treat as famous Bollywood choreographers – Geeta Kapur and Terrance Lewis will be seen gracing the show alongside the judges of DID L’il Masters during a special challenge-based episode. While all the performances left the judges and guests impressed during the shoot, Aarav’s challenge to Geeta Kapur left everyone in shock. The young kid dared the popular choreographer to perform a dance on pointed, metallic nails. While anyone would think twice before taking up the challenge, Geeta Kapur went ahead and performed flawlessly to Ghoomar on the metallic nails.

While her performance on the stage of DID L’il Masters left everyone in awe, the audience will be entertained by all the challenges given to our L’il Masters by our judges and special guests. However, that’s not it! The young dancing sensations had also got a chance to challenge the judges, and they haven’t spared their gurus. The kids challenged Mouni Roy to eat jalebis while being hung from a height. Remo, on the other hand, was challenged to perform an MJ dance in a Sumo suit, while Terence had to perform a dance with two puppets - Asha and Nirasha. All in all, it was an exciting episode that you surely cannot afford to miss!

+ 14
3 months ago Oh! Dancing on metallic nails sounds a bit painful. Kudos to her for doing it!🙌🏻

+ 4
4 months ago Some artists are multi talented and commendable

+ 10
4 months ago Omg what a challenge and glad Geeta did it.