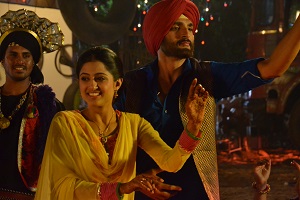 The ongoing episodes of Colors' popular show Bani - Ishq Da Kalma focuses on the efforts being made by Rajji and Bani to bring Sohum's memory back.

As the doctor has told that they will have to remind Sohum (Adhvik Mahajan) about the things which have happened with him in the past, Bani (Shefali Sharma) and Rajji (Neha Bagga) will now take Sohum to the dhaba where Rajji and Sohum had met for the first time.

Our source says, "Parmeet (Gaurav Chaudhary) who wants to be with Bani will don a Sardar's look and go to the dhaba so that no one would recognize him and he could also be with Bani. For this particular sequence, Gaurav donned a look of sardar with a turban, beard and mustache."

Our source further added, "Gaurav did not remove his turban after his look test and he worked with the make-up artist in selecting his beard and mustache and the glue which was used to fix the beard and mustache wasn't making him smile properly."

When contacted Gaurav, he told us, "I wanted to be comfortable in my new avatar for carrying out the performance gracefully and therefore I wore the turban throughout the evening. I didn't want to look under aged or over aged and therefore we carefully chose the look to make it look as real as possible. I was very happy with the performance and meeting a legend like Gurdaas Maan which even made the mid night shoot a cakewalk for all of us."

Semeira 6 years ago Gaurav Chaudhary is an awesome actor no doubt !!!!! i really hope that Parmeet and Bani will be together again

BullsEye777 6 years ago The sardaar makeover looks good on Gaurav

nami9j 6 years ago Waiting for sohum to remember his love for rajji.. Cant see soji seperated...hope his memory comes back soon and this track is not dragged..
Love neha bagga and adhvik mahajan

Mages 9 years ago dabbang moves are great...
anjaana anjaani is good too...

nowadays i am loving the steps of Ready...and the song is Character Dheela...some really cool steps in it...

Ann_92 9 years ago de golmaal step s so much fun

--jiya-- 9 years ago nice article... loved shimmy in ainvayi and the wrist movements of anjana/anjaani... and sorry no offense, but belt movements in Dabangg, i thought it was just hyped...

@Tannistha - tuting is much more complicated as far as I know, Golmaal and Anjaana Anjaani were no where near tuting... sorry, no offense again

LeadNitrate 9 years ago the wrist moves are actually called Tutting, if i am not wrong, lol at the nomenclature