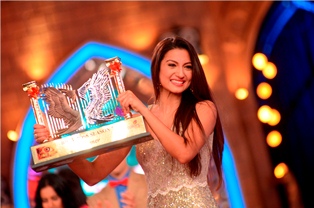 When Bigg Boss Season Saath 7 launched on 15th September, little did the contestants know that when they walk out that they had become national household names. Especially Gauahar Khan, who, 103 days later, walked out as the winner of the seventh season of Bigg Boss. Resembling a 'masaledaar' Bollywood movie, this season has witnessed varied emotions from love, hatred, jealousy, vengeance to betrayal- the show had it all.

Above all, this season has been the most watched, most buzzed and most trended season of all times. With cameos from a volley of guest entries made by friends and family members of the contestants, the show has been a complete blockbuster with twenty celebrity contestants who also found a loyal friend in Heaven.

Stepping out of the Bigg Boss house with great pride, Gauhar Khan has walked away with not only the Winner's Trophy, but also prize money of Rs. 50 lakhs. Receiving the trophy from the superstar host Salman Khan, Gauhar celebrated her victory with her family members, friends and co-contestants. Tanishaa Mukherjee, Ajaz Khan and Sangram Singh came in as first, second and third runners-up respectively.

Gauhar's journey in the show has not been a cake walk. She came across as someone who always stood for what she believed in and surpassed her co-contestants with her confidence and perseverance. In not much time, she found a confidante and companion in Kushal Tandon and they became inseparable from there on. While Gauhar always believed in fighting her own battles, she stood by Kushal through thick and thin.

In fact, she even exited the Bigg Boss house when he was evicted for misbehaving with Andy. However, she did not accept her love for Kushal publicly until he recently proposed to her on national television in the show, thereby making their relationship official. Having performed every task with utmost determination, Gauhar with her never-say-die attitude played the game with dignity. While she received much criticism for her dominant nature, her constant banters with Tanisha Mukherjee and playful conversations with Andy have been the highlights of this much spoken about season. 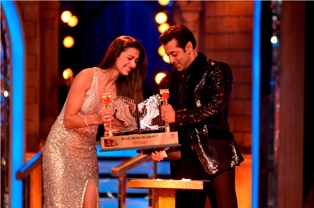 After being declared as the winner of the seventh season of Bigg Boss, Gauhar said, "It still hasn't sunk in yet that I am holding this trophy as the winner of Bigg Boss Season Saath 7. There could be no other better experience than the one I have had in the Bigg Boss house. This show has given me more than just a victory.  My journey here has made me even stronger and I take back with me a beautiful memory to cherish forever. As I move on to another chapter in my book of life, I would like to thank my family, friends and fans for being my support system. I look forward to celebrate this triumph with them."

Commenting on the season, Manisha Sharma - Weekend Programming Head, Colors, said, "This season of Bigg Boss has super ceded all our expectations and has raised the bar in terms of content and entertainment. The exciting lineup of contestants not only made it one of the most sought after seasons but also made Bigg Boss the topic of dinner table conversations. Salman Khan, as host, took the show to another level through his true inimitable style. We would like to congratulate Gauahar on her win and are glad to be closing the season on a high note. As we draw curtains on the 7th season of Bigg Boss, we are pleased to have presented 105 days of non-stop entertainment to our audiences."

Speaking on the format of the show, Deepak Dhar, Managing Director - Endemol India Pvt Ltd. said, "We are happy that this season has outdone previous seasons not only in terms of content but also in terms of magnitude and scale. It's been an exciting journey where our hard work has paid off. We introduced new elements which were well appreciated by viewers and we have tried to make this season engaging enough with our viewers through interesting initiatives on radio and television. We also gave viewers 24x7 access to the ongoings of the Bigg Boss house first time ever. Having said that, we take pride to have pushed the boundaries of creativity together with Colors and have succeeded in making this season a huge success."

The Grand Finale night of Bigg Boss Season Saath 7 was a true extravaganza filled with some spectacular performances by former contestants. Host Salman Khan performed to various songs and was joined by previous contestants including Elli Avram, Armaan Kohli, Kamya Punjabi and Pratyusha Banerjee. Setting a romantic mood, the love-struck Jodis of Bigg Boss Season Saath 7, Kushal - Gauhar and Armaan - Tanisha swayed to some popular love songs. In fact, Armaan and Kushal also engaged in a dance war as they transformed the stage into a battleground as they delivered an action-packed performance. Adding some fun element to the grandeur, VJ Andy, Ajaz and Sangram left everybody in splits by performing a joker act.

Bigg Boss Season Saath 7 has been an amalgamation of some entertaining and nerve-wrecking moments that have enthralled audiences for 105 days. Hosted by superstar Salman Khan, the show was themed around the concept of Heaven and Hell and saw some incredible programming and production initiatives. Produced by Endemol India Pvt. Ltd and aired on Colors, Bigg Boss Season Saath 7 was an entertainment fiesta and promises to entertain and delight viewers in seasons to come.

Heart2Soul 7 years ago Salman sucks, he's so rude and arrogant and takes every opportunity to make others especially Gouher, Kushal and Ijaz look bad, I hate him to bits, I simply don't understand why Indian media and Indian public puts up with that. It's truly a shame that one person takes advantage of his position and abuses everyone he wants to and gets away with that only because he a film star. Shame shame shame shaaame

+ 4
7 years ago u deserved to win and so u did gauhar!
all your fans loved you for your 'pat on face' attitude and for being so fair and square! am sure this comming year would follow with more success and accolades your way! love you gauhar!

sepultraonyx 7 years ago bb 7 would have been complete bore without gauhar khan...u rcked it babe

7 years ago Love you Pratyusha Banerjee, our Princess.

7 years ago Congratulations Gauhar Khan!!!Pratyusha Banerjee ,we love you very,very much!!!