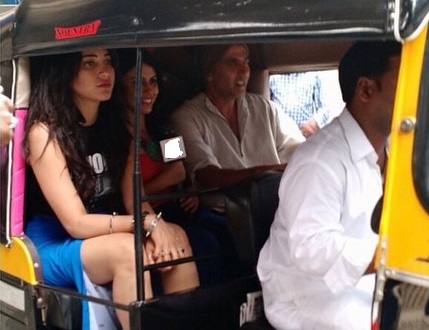 Our very own Khiladi Akshay Kumar as we all know is a happy go lucky man and never does he shy away from doing anything that makes him comfortable.
In just another incident, today morning our macho man was snapped taking rickshaw rides.
Yes, you got that right, Akshay Kumar who is all set for his upcoming film Gabbar Is Back, was snapped taking rickshaw rides en-route for an interview. Along with him was his co-actor Shruti Hassan and the reporter from a news house to whom Akshay was giving interview while traveling. He did set the public in surprise while he took the local transport.
Akshay as well posted his picture on a social networking site with a caption that read: "Sat in a rickshaw today after ages giving an interview while traveling to another interview venue with Shruti! #GabbarIsBack #promotions in full swing!"
No doubt our fearless actor does know it well to manage his time and work along with surprising his fans.
Gabbar Is Back starring Shuti Hassan and Akshay Kumar, produced by Bhansali Productions is set to hit the theatres on 1st May, 2015.
Priyanka Chauhan