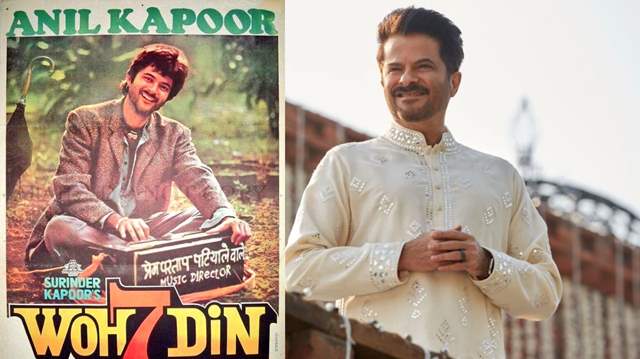 Anil Kapoor is one of the few actors who can hold the label of "evergreen timeless star." He never ages, and with each film, he proves that he will continue to strive and perform better. Currently, the actor is all set for the release of his film JugJugg Jeeyo which will hit the theatres today.

On Thursday night, he rushed to Instagram to share his beautiful Bollywood journey with his followers. On Instagram, the actor shared a short clip from his film 'Woh 7 Din,' calling it a "journey down memory lane."

He penned, "From Prem Pratap Singh Patiyalawale in #Woh7Din to Bheem in Jug Jugg Jeeyo who’s also from Patiala! It’s been such a wonderful journey! My life changed 39 years ago and the nostalgia is real! This video is a trip down memory lane!”

Anil revealed that during his four-decade career, he made some films for his buddies even if he was "not convinced" by the screenplays. During a recent media interaction for JugJugg Jeeyo promotions, the actors career. He also discussed the ups and downs of his cinematic career, saying, "There have been lows."

But those moments were not all dreadful because they were more of a hit-or-miss kind of low. As a result, he considers himself extremely blessed. The actor also attributed his success to hard effort and lady luck, saying that he made the right decisions at the appropriate time and never took it nonchalantly.

With the 1979 film Hamare Tumhare, Anil Kapoor made his Bollywood debut. He later acted in other films, including Tezaab, Mr. India, Beta, Ram Lakhan, Parinda, and Lamhe. In addition to JugJugg Jeeyo, the actor will appear in Fighter, which also features Deepika Padukone and Hrithik Roshan. He will also appear in Animal, helmed by Sandeep Reddy and starring Ranbir Kapoor, Bobby Deol, and Parineeti Chopra.