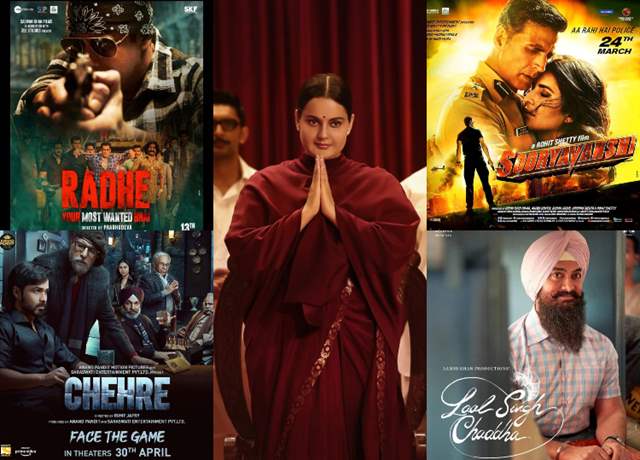 It has been a long and excruciating year for Bollywood owing to the coronavirus crisis. With the declining business, it has been a roller coaster ride for everyone. The shooting of numerous films has been halted and films continue to queue for their release. Apart from the film industry, even the audience has been waiting for the opening of the cinema halls.

Here’s a list of films that you should look forward to as the theatres reopen:

The film has created a huge buzz because of its star cast, its stunning international locations and an obviously dramatic and suspenseful theme. Considering the push Chehre has received, makers are fixated on releasing the film in theatres.

Laal Singh Chaddha is a treat for all the Aamir Khan fans as it also stars Kareena Kapoor Khan in the lead role and the film marks her on-screen reunion with Mr. Perfectionist after seven years. Fans have witnessed the pairing of Kareena and Aamir Khan in films like 3 Idiots and Talaash before.

‘Laal Singh Chaddha’ is a remake of the Oscar-winning Hollywood film ‘Forrest Gump’ and is scheduled to hit the screens during Christmas 2021.

The trailer of Kangana Ranaut starrer Thalaivi has garnered a lot of praise and she will be seen portraying the life of actor-turned-politician J Jayalalithaa. Previously, the actress had also shared pictures of her massive physical transformation as she impressed her fans with her new retro look as Jayalalithaa.

Kangana left no stone unturned in getting into the skin of former Chief Minister J. Jayalalithaa. From the looks of it the Panga actress underwent a massive physical transformation and the recent stills from the biopic will blow your mind.

The makers of Sooryavanshi have seen an array of delays and it is one of the most obvious films to be hit by the Covid-19 pandemic. The film's trailer followed by a press launch witnessed immense buzz and led to the usual love and anticipation from viewers that a massive film like Sooryavanshi can expect.

However, the repeated curfews and lockdowns - leading to the shutting down of theatres - has kept the film from releasing. While even if it is released, it is very doubtful the film will be able to make a good business. With that, the makers have decided to put a temporary hold on the thought of releasing the film.

The highly-anticipated action film also features Katrina Kaif as the female lead and marks her reunion with Akshay Kumar after nine years. The film also stars Ranveer Singh and Ajay Devgn in a cameo role.

Directed by Prabhudeva, the trailer of Radhe: Your Most wanted Bhai was launched today, and it promises the perfect mix of high – octane slick action, catchy dialogues and chart-buster music.

Speaking of Radhe, Salman Khan has kept his promise and the film will release on the occasion of Eid on May 13 in theatres as well as ZEE5 with pay per view service ZEEPlex.

24 days ago People are dying out faster than ever. Who has the time to go to the theatres in the midst of this pandemic?