This month under the limelight, BollyCurry brings its readers a talented model and actress who's screen presence during the 70s and 80s raised the glamour quotient by a good few notches. Here is presenting you a microscopic biography on the versatile Zeenat Aman. 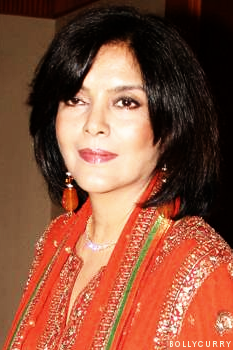 Zeenat Aman was born on November 19, 1951 in Mumbai, India. Her father, Amanullah Khan, was a script writer known for writing grand classic movies such as Mughal-e-Azam and Pakeezah. Actor Raza Murad and Murad are her cousins and uncle respectively. After her father's demise, Aman moved to Germany at the age of thirteen, but returned to India six years later as she did not enjoy being abroad. On completing her bachelors from the prestigious St Xavier's College, she moved to Los Angeles for further studies, where she studied at University of Southern California. Upon her return to India, she began modeling and won the title of Miss Asia Pacific in 1970.
Aman debuted with the film Hulchul in 1971 and followed it up with Hungama that same year. However, the roles did not being her appreciation or recognition. She was then offered a supporting role in Hare Rama Hare Krishna alongside Dev Anand. In this film, Aman won the hearts of the audience and critics for her stellar portrayal of a troubled hippie. It was also for this movie that she won her first ever Filmfare Best Supporting Actress award.
Two years later came Yaadon Ki Baraat in the year 1973. Aman's look and character as Sunita was instantly appreciated and loved by her fans; to date, she is still known for the popular song "Chura Liya Hai Tumne Jo Dil Ko".
In 1978 came Raj Kapoor's much criticized film Satyam Shivam Sundaram. Aman was primarily chosen for the film to add oomph and sex-appeal. Although the actress was looked down upon for her exposure, this same film and character went on to earn her more fame and even a Filmfare nomination in the Best Actress category. That same year she was cast in Don alongside stars such as Amitabh Bachchan. Her role as a westernized girl seeking revenge for her brother's murder had a lot to do with the film's success. Aman then went on to star in successful films such as Dharam Veer (1977) and The Great Gambler (1979).
During the 80's, Aman starred in Insaaf Ka Tarazu, Qurbani, Ali Baba aur 40 Chor, Dostana and Lawaaris. Her final role as a lead actress was in the 1989 film Gawahi.
Comparing Aman's career as an actress to others during her time, it is apparent that she offered a little more that what her contemporaries could. While actresses aspired for lead roles as wives and lovers, Aman daringly opted for unique and different characters that stood out from the lot. The career-oriented, ambitious girl in Ajnabee (1974), or the one involved in an extra-marital love affair in Dhund (1973) are great examples.
Did you know?
- Aman is the first Indian woman to win the Miss Asia Pacific title.
- Aman tried her hand at entering Hollywood, but the ventures were unsuccessful.
- Aman's name has appeared in Encyclopedia Brittanica for giving a new meaning to the characterization of heroines in Hindi films.
- Aman received a Lifetime Achievement Award in 2008 at the Zee Cine Awards and more recently the Outstanding Contribution to Indian Cinema Award at the IIFA in 2010.
Writer: Fariha L.
Editors: Ritchelle C. and Jenifer Y.
Graphics:  Marsh P.
5 Likes