This month, in the spotlight for Fragrance of Yesteryears, we have the multi-talented, fully entertaining and absolutely hilarious Kirron Kher taking the enticing hot seat.
Kher was born in the Indian state of Punjab on June 14th, 1955. Brought up in a Sikh family in Chandigarh, she passionately played badminton as a child whilst completing her studies from the Punjab University in Chandigarh. 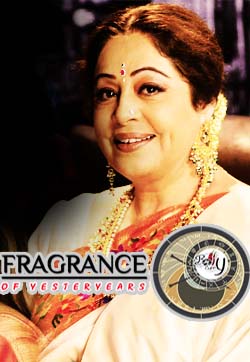 Kher began her acting career with the Punjabi film Aasra Pyar Da in 1983. After the admiration she received in the wake of the movie, she went on a hiatus to raise her son, Sikander Kher, following her divorce with her ex-husband, Gautam Berry. Later she married the now internationally recognized actor, Anupam Kher, in 1985.

Kher returned to her acting career with the play Saalgirah by Feroz Abbas Khan. Post the play, she hosted three television shows: Purukshetra on Zee TV, Jaagte Raho with Kirron Kher and Kirron Kher Today. Purukshetra was highly appreciated by the audience as it touched the social issues that women faced at the time.
The talented actress returned to Bollywood in 1996 with Shyam Benegal's Sardari Begum. It was for this film that she received her first Special Jury Award at the National Film Awards event in 1997.  Her next movie in 2000 was Rituparno Ghosh's Bengali film, Bariwali. She received a National Film Award for Best Actress for this movie as well, however, the accolade came with a price - a controversy surrounding her name. Another Bengali film actress, Rita Koiral, claimed that the award was equally hers as she dubbed the voice of Kher's character in the film. Kher refuted the fact by stating she had rehearsed endlessly for the dialogue delivery and deserved the accolade. The award eventually was not shared and Kher was rightfully entitled to it.
Kher's next movie was a multi-starrer - Sanjay Leela Bhansali's Devdas in 2002. The movie's cast included superstars such as Shah Rukh Khan, Madhuri Dixit and Aishwarya Rai Bachchan. The movie won her the Best Supporting Actress Award at the Filmfare presentation.

Kher's career took a major hike with the 2003 film Khamosh Pani. She portrayed the role of a struggling woman during the partition of India-Pakistan. Her role lead her to be internationally recognized, winning the Best Actress Award at the Locarno International Film Festival in Switzerland, the Karachi International Film Festival, and International Festivals at Ciepe, held in Argentina. The film brought her much fame and was titled the Best Film at the Golden Leopard Festival Grand Prize in Locarno.
In the past decade, Kher has starred in multiple movies in the role of the supporting character including Main Hoon Na, Hum Tum and Veer Zaara in 2004, and Mangal Pandey: The Rising in 2005. In 2006, she acted in three films: Rang De Basanti, Fanaa and Kabhi Alvida Naa Kehna. She added a few comical roles to her kitty in 2009 with Singh is Kinng and Dostana.

Recently, Kher was seen in Total Siyapaa alongside Ali Zafar and Yami Gautam, and in the future will be soon be seen in Khoobsurat.

Did you know?
Writer: Fariha L.
Editors: Komal P. and Jenifer Y.
Graphics: Komal P.
Do you have a suggestion or comment for BollyCurry? Drop us a PM at  BC_Dropbox today.