This week, in Fragrance of Yesteryears, BollyCurry brings to the spotlight a multifaceted television personality - an actor, an anchor and a producer. This individual is none other than Amitabh Bachchan.

Bachchan was born on October 11, 1942 in Allahabad, India. He was first named "Inquilaab", meaning revolution, inspired by the phrased "long live revolution" during the 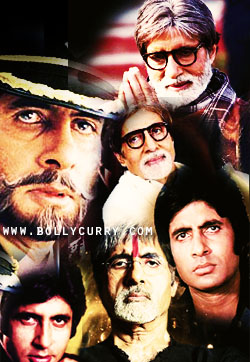 Indian independence days. Later on, his father, Harivansh Rai Bachchan, changed his name to Amitabh, which means "the light that never dies". Bachchan lost his father in 2003, and his mother in 2007.

Bachchan's debut on the big screen was as a voice narrator in the 1969 film Bhuvan Shome. The same year, he made his appearance on the screen in Khwaja Ahmad Abbas' Saat Hindustani. The film that became his rise to stardom was the 1973 Zanjeer; it also gave him the title of Bollywood's "angry young man". It was for this film that Bachchan was nominated in the Filmfare Best Actor category for the first time. That same year, Bachchan married Jaya Bahaduri, and starred alongside her in Abhimaan, which was a box office hit. Next followed Namak Haraam. For this film, Bachchan won his second Filmfare Best Supporting Actor Award.

After these hits, Bachchan's success only escalated with films such as Sholay, Deewar, and Coolie. In 1982, he took a break from acting and entered politics for a short term of three years. In 1996, Bachchan started his own production company, Amitabh Bachchan Corporation, Ltd. (A.B.C.L.). The first film under this production company was Tere Mere Sapne, which was a box office failure. Subsequent other films under the production banner failed to do well at the box office too.

In the year 2000, Bachchan returned to the big screen as the strict professor of Gurukul in Yash Chopra's Mohabbatein. He continued to perform patriarchal roles in Ek Rishta: The Bond of Love (2001), Kabhi Khushi Kabhie Gham (2001) and Baghban (2003).

This legendary actor has also worked magic on television as the anchor for the popular reality quiz show Kaun Banega Crorepati (KBC), which started in 2000 and its second season followed in 2005. Bachchan recently hosted its sixth season in September, 2012.

Did you know?
BollyCurry thanks this living legend for his contribution to the industry and eagerly awaits to see him back at his best in Bhoothnath Returns, releasing next month!

Writer: Fariha L.
Editors: Khushi P. and Gunia M.
Graphics: Komal P.
Have a suggestion or comment for BollyCurry? Then drop us a PM at BC_Dropbox today!