Hyderabad, Sep 24 (IANS) Telugu superstar Chiranjeevi and his newly-launched political party Praja Rajyam has come under attack by none other than two of his erstwhile leading ladies.

Actress Vijayashanti, who heads a party that espouses the cause of a separate Telengana state, said Chiranjeevi's political moves were just 'pretensions', local media reported Wednesday.

'Chiranjeevi's political achievements are cardboard cutouts when compared to those of mine. Even in cinema, it was I who established new trends. While I am the real champion of the Telengana cause, Chiranjeevi is merely pretending to shed crocodile tears in our name,' Vijayashanti said in a statement.

In her acting career, Vijayashanti has played Chiranjeevi's leading lady on 18 occasions - the highest for any actress. She now heads a party called Talli (mother) Telengana.

'Gullible crowds are being taken in by Chiranjeevi, who claims credit for health centres built on lands and doles donated by my leader (Chandra Babu) Naidu and claims blood contributed by the poor as his own,' Roja alleged.

The former multilingual actress, who has done many Tamil films also, has starred opposite Chiranjeevi in two Telugu films.

Workers of Chiranjeevi's Praja Rajyam, miffed at their leader coming under attack, carried out mock 'exorcising rituals' against the two actresses in Medak district, offering sliced lemons, vermillion and broken pumpkins to their photographs.

'The actresses have lost their wits due to the influence of devils that are egging them on against the future of Telugu pride. The powers of angels and spirits invoked by us will cure them through their pictures,' said Peddaramaiah, a die-hard Chiranjeevi fan.

Chiranjeevi, who has acted in around 150 movies in his three-decade-long career, entered politics last month by launching Praja Rajyam. The 55-year-old is yet to react to the allegations of his former co-stars. 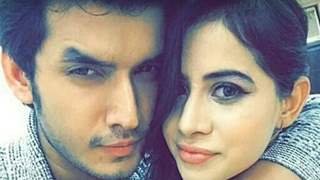 Paras Kalnawat opens up on his equation with former girlfriend, Urfi ...