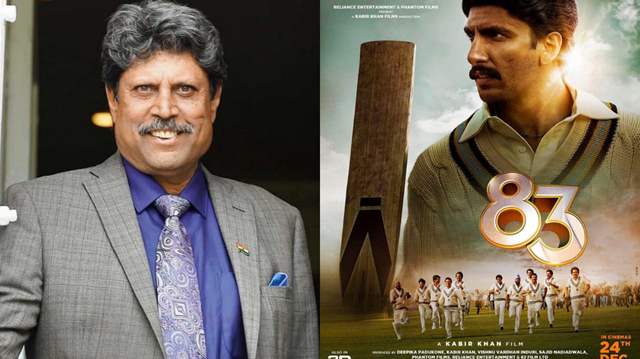 Former New Zealand cricketer Richard Hadlee sent a poignant email for cricket star and India's pride Kapil Dev recently, congratulating him on the success of '83' and how the experience of seeing the uplifting sports drama impacted him entirely.

"Thank you for your nice thoughts, Richard. I'm delighted you liked the movie. This is a genuinely unique message from you."

'83,' one of the most popular and well-received films in recent memory, was praised by critics and viewers alike throughout the world. The magnum opus directed by renowned director Kabir Khan made ripples not only in India but throughout the world, as moviegoers celebrated India's win in theatres.

The amazing sports tale battled against all difficulties, including the global epidemic, like the Indian squad in 1983. '83' cruised to victory across India and key outside markets, despite an increase in the number of Covid-19 cases.

"The sort of love that's coming out for '83' is astounding," Kabir Khan said at the time. It's a film that will be remembered for years to come and will be one of my career's defining films."

According to the reviews, '83 is not just a film, it's an emotion,' therefore the sports drama commemorates India's greatest sporting achievement and is more than simply a box office success.

10 months ago I Don’t care if people call this movie a flop, it’s an entertainer.. Especially as most of the even smallest details were accurate based on real incidents etc. What really pisses me off is, KJO's useless movies are HIT, but people still troll them, but a movie like this fails and still gets trolled.. I've seen 83 three times, to watch, to analyse and then to enjoy.. (im not even a Ranveer fan)