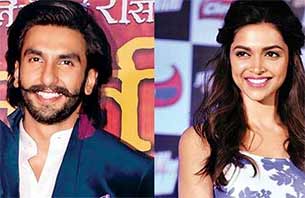 Deepika Padukone's chemistry with Ranveer Singh in "Ram Leela" is much talked about thanks to its trailers, but she credits its script for this.

The actress says she has shared a great onscreen camaraderie with her other co-stars as well, and that's why she believes that the chemistry lies in the script.

"I have had great chemistry with three other people as well. I have had it with Ranbir Kapoor, Saif Ali Khan and Shah Rukh (Khan). I think that's really a classic example of 'chemistry lies in the script'. It lies in the dialogues, it lies in the way the characters are written," the 27-year-old said here Tuesday at the unveiling of the cover of Star Week magazine featuring her.

She also says "a large part" of the chemistry is to do with "your comfort level with your co-star".

"But the fact that I have had great chemistry with three to four people, (I guess) a lot of it is in the script," she added.

Deepika has already delivered two superhits this year - "Yeh Jawaani Hai Deewani" with Ranbir Kapoor and "Chennai Express" with Shah Rukh Khan, both making it to the Rs.100 crore club.

Deepika hopes that "Ram Leela" and her films in the new year prove to be equally special.

"I hope 2014 is as special for me as 2013 was. In the beginning of the year the only thing I knew was I am going to have four releases. I didn't know how each of them is going to do. Each film was so different from the other.

"It also tested me in terms of the amount of work I was doing because there was a time when I was shooting 'Yeh Jawaani Hai Deewani', 'Chennai Express' and 'Ram Leela' at the same time.

"But looking at the results of 'Chennai Express' and 'Yeh Jawaani Hai Deewani', I can't complain. It was worth every minute of being on those film sets. I just hope with 'Ram-Leela' and the other films that I am doing, it is going to be equally special," she added.