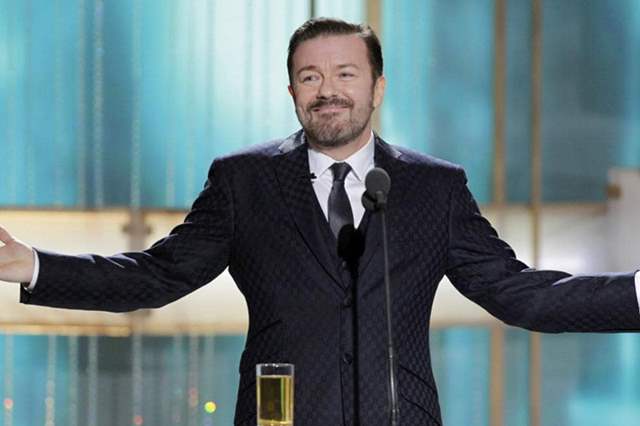 In times where Oscars and Emmys have chosen to function with a host now, Golden Globes don't quite believe that and will continue to have a host as always. And not just any actually but the legendary Ricky Gervais.

The actor-comedian will be returning to host Golden Globes 2020 for a record fifth time. Interestingly, Gervais has been repeatedly stating that he would never take up the job again but here we are, all set to do that yet again.

The British comedian previously hosted the event from 2010 to 2012 and returned for the fourth time in 2016. Gervais' hosting stints have been marked by infamous jokes at the expense of Hollywood A-listers such as Bruce Willis, Mel Gibson, Ben Affleck, and Jennifer Lawrence as well as the organizers of the event, the Hollywood Foreign Press Association.

“Once again, they've made me an offer I can’t refuse. But this is the very last time I’m doing this, which could make for a fun evening,” said Gervais in a statement.

"There is always palpable electricity in the room when Ricky takes the Globes stage. His return as master of ceremonies at the Golden Globes is much anticipated,” said Paul Telegdy, chairman of NBC Entertainment. “It is sure to make for an unexpected evening. We can’t wait to see what he has up his sleeve.”

Lorenzo Soria, president of the HFPA added: “When Ricky Gervais is at the helm of the Golden Globes Awards, we can always expect the unexpected. We’re excited to see it all unfold on Jan. 5!”

Another Blackface Scene Removed; This Time From Hulu's 'Golden Girls'