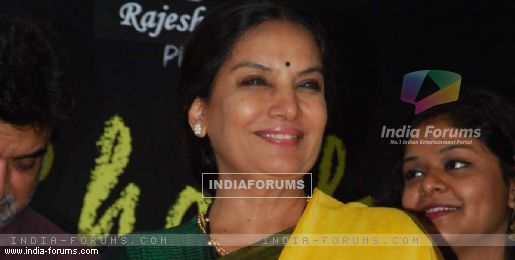 Film and theatre veteran Shabana Azmi rues how fashion is taking away the attention from cinema at the 68th Cannes International Film Festival. She says the film gala should be treated seriously and not as a fashion parade ground.

The actress took to micro-blogging site Twitter to remind her fans and followers about the main motive behind holding a film festival.

"2day Cannes seems to b a clothes parade! It's a serious film festival guys not a fashion event. Hw abt focussing on films n filmakers (sic)," Shabana tweeted on Friday.

The "Arth" actress also shared some of her memories from the French Riviera who want to be part of the film gala with her critically acclaimed film "Nishant", which released in the 1970s.

"When v went 2 Cannes with Nishant in competition v only had 8USD each n publicity material didn't turn up. Shyam Benegal thot up a strategy," she posted.

The film, directed by Shyam Benegal, traced life of a school teacher and his wife with hints of the exploitation due to zamindari (landlord) system.

The actress pointed to the huge attention she garnered when she draped a sari for the festival.

"He made Smita P n me parade in Kanjivaram saris from 8am! Ven ppl lookd at us curiously v wud rush n say pls watch our film! V had a fullhouse (sic)," the actress wrote.

Meanwhile, the first look of her film "Jazbaa", which has Aishwarya Rai Bachchan in the lead, will be showcased at the fest at a closed door United Nations panel discussion on May 16, followed by a media event on May 19.

Aishwarya, who is attending the film gala as a L'Oreal Paris brand ambassador, will unveil the first look of the movie, which is directed by Sanjay Gupta. The film marks the former beauty queen's comeback to Bollywood post-motherhood.

5 years ago Shabanaji so you really think we"d take a film or filmmaker seriously if they showed up to Cannes in jeans and tees? The dresses and regal outfits make us stop and take notice of the film, actors, and makers of the film. It just is what it is.