View Profile
For all of you who were impressed by the Dabaang girl Sonakshi Sinha in the space of a mere debut blockbuster, her sign up for a future project opposite Action Kumar Akshay last year was certainly great news. 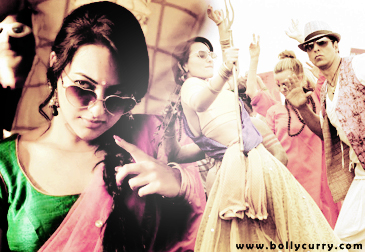 And now, BollyCurry brings you a couple visual teasers straight from the sets of Joker, the said Akki-Sonakshi venture. A Farah Khan home production, with hubby Shirish Kunder having written the script that he shall also be directing,  this movie shall be in 3D, having drawn inspiration from the widely popular and Oscar sweeping Hollywood flick Avatar.

And on that note, Joker promises to be a never-before-seen experience, if words of the film makers are to be believed, with comic book characters and elements of fantasy at play.

It is being heard, that extensive pains have been taken in the construction of sets in Chandigarh which Shirish claims are an unprecedented for Bollywood and it's millions of viewers. More about the movie genre, or storyline, Kunder refuses to divulge, deeming it too early to spill the beans.

For now, there is this capture of Sonakshi Sinha in chaniya choli and heart shaped glares is up for first impressions and remarks. Then there is the other which captures Akki and Sona in action, grooving bindaas with a bunch of white women in the backdrop having donned the holy saffron robes!

Interesting or what?! Be sure to speak your mind!

Never thought I would be dancing, I was preparing to be an ...
18 minutes ago