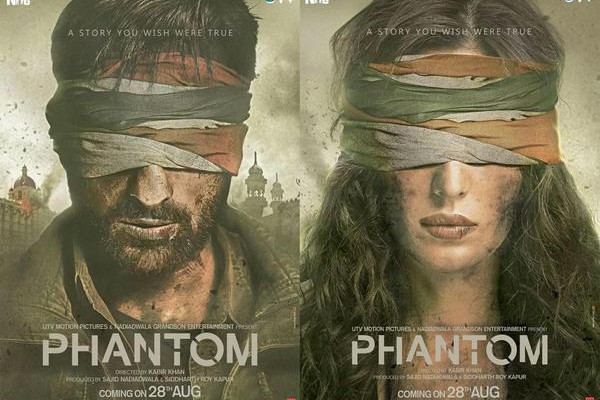 The first look of actors Saif Ali Khan and Katrina Kaif from Kabir Khan's upcoming directorial "Phantom" is out. The two posters, which ooze patriotism, feature the stars in a grim and dramatic way.

"Coming soon... PHANTOM," Kabir captioned an image in which Saif is seen blindfolded with the tri-colour.

He also shared a similar photograph with Katrina on it and wrote: "Here it is... PHANTOM first look."

While the stars are blindfolded with tri-colour, in the backdrop one can see Mumbai's iconic The Taj Mahal Hotel burning. Both the posters were headlined had "A story you wish were true".

As shared by the official Twitter account of UTV Motion Pictures, the distributors of the film, the first trailer will be out on Saturday.

"A story you wish were true. Coming 28th Aug to a cinema near you. #PhantomTrailer25July @Nadiadwala_Ent @kabirkhankk," UTV Motion Pictures tweeted on Thursday.

This would be the first time that Saif will be working with Kabir while Katrina had teamed up with the director in the 2009 thriller "New York" and the 2012 action spy movie "Ek Tha Tiger".