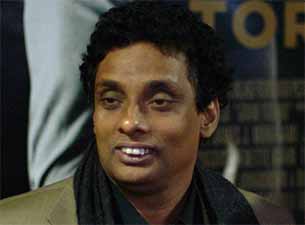 Acclaimed Sri Lankan auteur Prasanna Vithanage, who is awaiting the release of "With You, Without You", the third film in his war trilogy after "Death On A Full Moon Day" and "August Sun", says he made these films because of his helplessness during the Sri Lankan war and to stay sane.

"With You, Without You", which is about two characters who accidentally collide in the post-war Sri Lanka, releases in select cities in India June 13.

"More than half of my life was spent in the war. We were mere spectators of carnage and brutal warfare. That's why I became most sensitive as we were helpless during this catastrophe. My inability made me make two movies on how war has affected us. In the process, I also realised that films are my means of keeping sanity," Vithanage told IANS.

While the story of "With You, Without You" is based on the short story "The Meek One" by Russian author Fyodor Dostoyevsky, Vithanage has used it "as a metaphor for the aftermath of Sri Lankan war."

Vithanage's movie is about a Sinhala pawn-broker, played by Shyam Fernando and a young Tamil girl, played by National Award winning Indian actress Anjali Patil, who frequents his shop. They marry, but the memory of the war atrocities continues to rattle the wife.

"Two people from polarized ethnic backgrounds try to live together while shadowed by the past. How much can love heal when issues are beyond their control? The film yearns for unconditional, limitless love," he added.

Vithanage feels the reason viewers seldom get to see films on this theme is because, "most filmmakers are afraid to touch this subject because of its sensitivity and fear of censorship."

"As a society, we cannot move forward without acknowledging the past," he added.

He says the sensitivity of this subject has been the biggest challenge for all filmmakers.

"The sensitivity of the issue and how people perceive it has become the biggest concern. People normally like to push this kind of an issue under the rug," said Vithanage, and added, "I still don't know how they (audiences) will react (to 'With You, Without You') because it's not yet released in Sri Lanka."

Having made seven films over two decades, Vithanage has collaborated with Indian technicians on several occasions. He says such collaborations have worked in his favour.

"This is not the first time I worked with Indian technicians. This is my fourth collaboration with editor Sreekar Prasad. The sound of my previous three films was handled by Laxminarayan.

"But this is the first time I was working with an Indian actress. I cherished and loved the experience, because Anjali Patil was a thorough professional and she made my job easy," he said.

Indian collaboration in particular has helped Vithanage to a great extent.

"Sreekar Prasad co-produced my last film. Rahul Roy from Aakar is one of the producers of this film. Indian portfolio has helped me garner Sri Lankan producers to support me to complete my project. It's a huge advantage for a Sri Lankan filmmaker," he added.

Vithanage is a renowned filmmaker in the international film circuits, but his films have seldom had a commercial release outside his country. He is extremely happy as his film is being released by PVR Director's Rare in India.

"India is a big commercialized industry and I am glad that because of the multiplex culture that emerged recently, there is room for international independent movies as well," he said.

What about the Sri Lankan film industry? How big is it and is it pioneered by superstars and box office record?

"We produce about 30 films a year and only 20 will be accommodated in the 135 theatres available. In 1970s we had 70 million spectators in a closed economy. Open economy and TV have reduced it to seven million. Our last superstar died 25 years ago and real superstars come from Bollywood, thanks to globalization," he said.

"After the war, there is a tendency of nationalistic epics making good box-office records. Patriotic movies tend to make few bucks," he added.